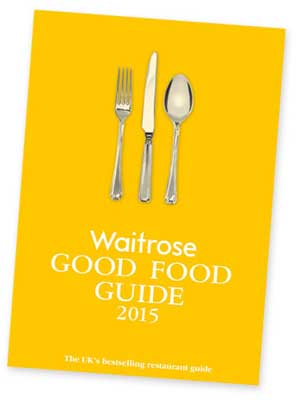 Just as Hollywood's award season appears to have kicked off with the Emmy's and VMAs in quick succession, so comes the UK's own food awards season. Yes it might not have quite or indeed any of the glamour of what's going on Stateside, but the release today of the 2015 Good Food Guide is where the season kicks off.

This year's guide has a few notable stories. The key one being the achievement of Clare Smyth, Chef/Proprietor at Restaurant Gordon Ramsay who becomes the first female chef in fifteen years to score a perfect 10. Who was the last one? Gunn Eriksen who was at the Altnaharrie Inn in Loch Broom, Ullapool, in 1999.

Smyth's score brings the total of UK restaurants ever getting that top score to eight and makes Restaurant Gordon Ramsay only the third in the country holding top marks in the current guide (the others are Simon Rogan's L'Enclume which holds on to the 10 he got for the first time last year) and Heston Blumenthal's The Fat Duck. As a result Restaurant Gordon Ramsay also rises from 5th to 3rd in the guide's Top 10.

The 2015 publication also brings good news for a number of other London restaurants. Claude Bosi's Hibiscus rises from 7th to 5th place while Pollen Street Social and The Square retain their positions at 6 and 8 respectively. There's just a small dip for The Ledbury which drops one place from 9th to 10th.

Outside the Top 10 there are four new entries for London restaurants - Simon Rogan's newest restaurant Fera at Claridges is in at 19, Hedone is 35, Restaurant Story at 37 and Chiltern Firehouse, proving that it's not just a celebrity magnet, at 48.