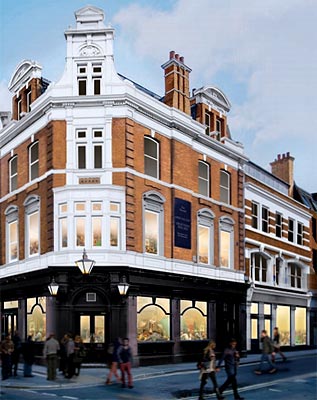 They brought us the joys of cicheti and Negronis when they introduced Londoners to the joys of a Venetian bàcaro with Polpo. Now Russell Norman and business partner Richard Beatty are turning their attention to the classic London pub.

Last week Russell announced that they'd taken over the old Marquis of Granby on Shaftesbury Avenue and were aiming to open it as an all-day dining pub in October. The Ape & Bird will feature four bars over three floors, take reservations for lunch and dinner while also holding some tables for walk-ins. Hot Dinners caught up with Russell to find out just what he has planned for his latest venture.

The first question has to be, why a pub? "Richard and I have always said it would be great to get a pub, a proper Victorian purpose-built boozer that we could stamp our mark on," he told us.

You'd be forgiven for thinking that he would then reel off a list of his favourite central London pubs, but that's not the case. "We don't frequent pubs in Soho. They tend not to put great customer service at the forefront of what they do. It's not about creating a relaxing environment, in general - and I don't want to get into trouble here - they're more about standing up, drinking lots and lots of beer and having just a packet or two of crisps to go with it before you roll back to the tube."

Turns out that the pair are more inspired by the country pubs they go to when they visit friends out of town, "something that's all about real British hospitality which is not something you find much of in central London pubs." When asked for a good example, Russell cites the Red Lion in Stodmarsh in Kent. "It's an unpretentious, family-run pub that looks after its locals and serves up straightforward classics."

So what can we expect on the menu at the Ape & Bird? Tom Oldroyd, the group's chef director and Russell have been putting together a hit list of daily basics, the must-haves. "We want the menu to be full of dishes you want to order." The frequently changing menu will also respond to what's available from the market. "So if the fishmonger has great Oxfordshire crayfish we can do that on the menu. We won't be slavishly following any trends."

Opening hours will be 10am to normal pub closing time and in addition to the main menu there'll be a dedicated brunch menu. "I'm a real sucker for a soft poached egg and we wanted a very strong brunch offer."

On the drinks front, there'll be a edited list of beers - "I tend to react adversely to too much choice," Russell told us. Tom Ross, the group's Bars Manager is in talks with Camden Town Brewery and the Brockley Brewing Company. "It'll be a succinct, intelligent collection of craft ales that represents London, the Home Counties and a little bit beyond."

As for the design, that's in Russell's hands and he's spent the past three or four months travelling the country looking for reclaimed bars. He's found a copper top Victorian bar in Bath and a lovely dark timber "maybe mahogany" bar from Bristol to install in the Ape & Bird. In addition to "buying up French light fittings like a madman" he's also found someone to make the kind of brutalist iron chandeliers that anyone who uses Balham or Clapham South tube stations will be familiar with. After all, he does have a lot of space to fill. If you knew the pub from before, you may be surprised by the size of the new place which has had a huge extension added by the developers and is now a whopping 5000 square foot.

Update - a few more dishes have been revealed: