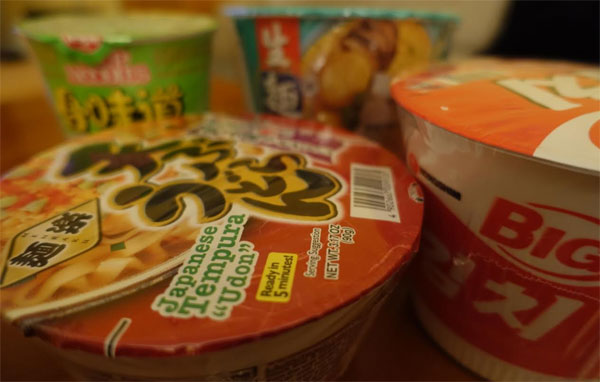 Updated: 12pm 1/4/15 - some of you guessed it, but others were definitely fooled. This was the Hot Dinners 2015 April Fool. But let's face it, it's only a matter of time before it really happens...

Seems as if the 2015 London trend of one dish restaurants is going strong with yet another preparing to hit East London soon. Pot Luck is the brainchild of two college friends Caz Parker and Jasper Little. As you may have guessed, they're intending to serve up one dish and one dish only - ready made noodles.

"We intend to take instant noodles and elevate them through a communal experience," Jasper told Hot Dinners. To that end, he and Caz have sourced hundreds of noodles from all over the world to serve in their Haggerston spot, including Sapporo ramen from Japan, Indonesian Indomie Mi Instan Mi Goreng Rendang and Paldo Kokomen Spicy Chicken Flavor from South Korea.

The original idea was to allow diners to use retro kettles to 'boil their own' but health and safety prevailed and so the pop-up will feature long trestle tables studded with special Quooker taps, dispensing boiled water. Basic noodles will cost £3.95 but you can pimp your noodles with the addition of a range of toppings including soy eggs, freshly grated vegetables, chicken fat and - for the sweet toothed - cinnamon and brown sugar.

It wouldn't be a one dish popup without a similarly truncated drinks list and Pot Luck doesn't veer from the tried and tested formula. They'll be serving pots of wine and tins of craft beer only. "Modern life is pretty complicated," says Caz. "What we've done is remove choice; our customers can trust us to know what they should be eating."

Pot Luck will open in Haggerston in April 2015 and will be open for lunch and dinner, Monday to Sunday. Keep up with their news on Twitter @potluckLDN