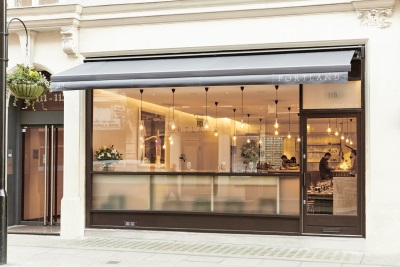 Good news for anyone working at the BBC as restaurant folk Will Lander and Daniel Morgenthau unveil their first joint project, a restaurant called Portland due to open in January. Will is one of the team behind The Quality Chop House and Daniel was previous at 10 Greek Street. Situated, as you might expect from the name on 113 Great Portland Street, Portland takes over an old clothes show-room and they've attracted a very interesting chef to the project.

Merlin Labron-Johnson may have an exotic name but he's Devon born and has been working in Switzerland and France before spending the past two years as sous chef at In De Wulf in Belgium which Eater described as one of "the world's most noted destination restaurants."

Merlin's describing his food at Portland as "light...but full of robust flavours. So expect dishes like:

As well as sides of whole-roasted cauliflower with thyme and a Wiltshire lardy cake for dessert.

The all-day restaurant is also promising an interesting breakfast menu with lemonade and sweet geranium or sorrel and green apple juice. Wild mushrooms will be served up with scrambled egg and smoked butter and we might have to go just to try the pain perdu with fruit and honey ice cream.

As for wine, the list will feature 45 hand-picked wines, which will change every month reflecting the weather, the menu and our guests’ favourites. It will start at £21 a bottle and include one of London’s most extensive ‘Fine Wine By The Glass’ lists going up to £28 for a glass of Château Gruaud Larose, St Julien 1995. A brief cocktail list features a Martini, Negroni and Bloody Mary and a seasonal starter of a spiced clementine Mimosa.

Portland opens from breakfast on Monday 12 January 2015 at 113 Great Portland Street, W1W 6QQ. It'll be open all day Monday to Friday, for lunch and dinner on Saturday and for lunch on Sunday. Keep up with their news on Twitter @portland113