[SIGPLUS_EXCEPTION_SOURCE] Image source is expected to be a full URL or a path relative to the image base folder specified in the back-end but /blog/2013/pizzapilgrims/gallery is neither a URL nor a relative path to an existing file or folder.
0
Shares

Pizza Pilgrims throw open the doors to their new Pizzeria 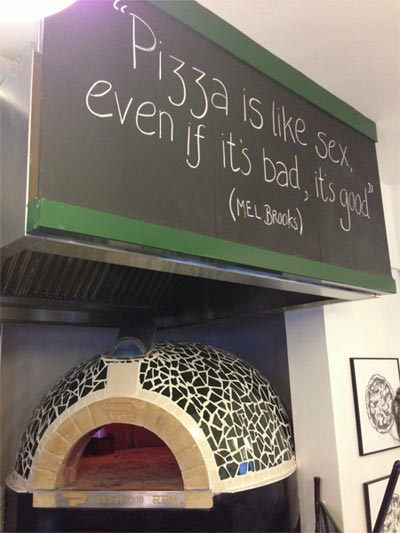 Last night ourselves and a bunch of foodies, bloggers, chefs and restaurateurs crowded a Soho pavement for the launch of the much-anticipated Pizza Pilgrims restaurant in Soho.

The new restaurant looked great - with an oven and stools upstairs that look perfect if you want to drop in and grab a snack and a cosier downstairs room complete with foosball table. As well as grabbing a few slices of pizza and more than a few glasses of the on-tap Prosecco, we also got our first look at the new menu (some of which we reported in our original story about the opening).

Key starter standouts are the fennel grissini with prosciutto and olive oil at £6 and panzanella at £5 for small and £8 for large. There are ten pizzas on the menu starting at £7 for the Marinara, £8 for the Margherita and up to £10 for the portobello, mushroom and truffle (plus a calzone ripieno for £11 too). We've added the full menu in the small gallery below. A real standout for us was the dessert blood orange sorbet (£4.50) which will come wrapped up like a Terry's chocolate orange and served in the skins. Really more-ish.

Pizza Pilgrims opens at 11 Dean Street tomorrow evening - August 1 - with just walk-ins and takeaway to start with. Expect bookings and maybe even deliveries later on (Thom's very excited about his new Vespa). Follow them on Twitter for the latest info.