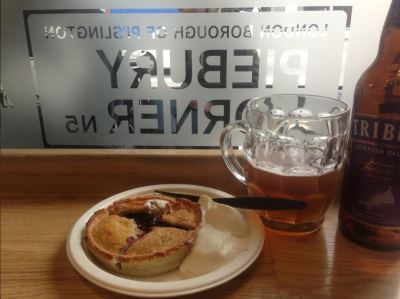 North London restaurant (and a Hot Dinners favourite) Piebury Corner on Holloway Road is today picking up the pieces after an attack last night by Napoli football fans.

The trouble started in the last hour before the Champions League match at the Emirates between Arsenal and Napoli. It had all been going pretty smoothly, owner Paul Campbell told Hot Dinners, with families and regulars enjoying their pies. A group of around 50-60 Napoli fans who'd been marching past the restaurant turned back, shoving someone queuing up for pies. They ended up attacking customers and hurling chairs through the serving hatch the restuarant uses on match days.

One man, a first-time customer and businessman, is still in hospital following the attack, having had a brain scan after a chair was cracked over his head.

The good news is that it takes more than a bunch of idiots to put Piebury Corner down. "We're clearing up today and it'll be business as usual tomorrow." said Paul. "We're looking forward to welcoming all our regulars back."

And there was one unexpected beneficiary of the night's madness. With the shop having to close, all the pies that would have otherwise gone to waste went instead (as they always do) to Islington's Manna Centre to feed the homeless.