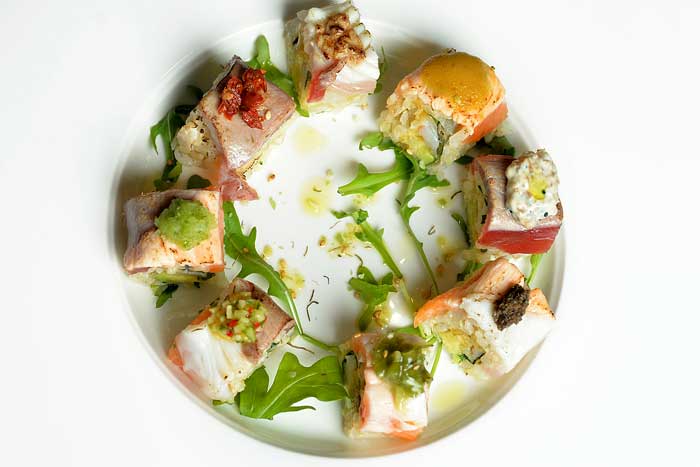 We're all for great sushi here at Hot Dinners, and by all accounts a new group from the Middle East is bringing some top sushi to this city when they open their first restaurant in London next year.

Oliver Maki currently have four restaurants in Kuwait and one in Bahrain. Think contemporary sushi dishes rather than ultra traditional. The family-owned business is run by brothers Oliver and Amer Zeitoun. And when they say they live for their business they really mean it. Apparently Oliver has eaten at one of the Oliver Maki branches every single day over the past decade since founding the business. Now that's devotion.

To open their Soho restaurant they've enlisted the services of Executive Head Chef Louis Kenji Huang (formerly Head Sushi Chef at Nobu Las Vegas). He's responsible for dishes like their Oliver Maki Roll pictured here. Made up of eight different rolls in one, it includes over 30 ingredients and eight toppings such as house made kizami wasabi, pico de gallo, and chilli mustard - they describe it as an eight course tasting menu on one plate.

The London retaurant will also feature The Sushi Jewel Box on the menu - a selection of sushi rolls in a specially designed box, which sounds a little like the sashimi platter at Engawa.

As for the space itself, the Dean Street venue will have room for 55 diners with a tiny cocktail bar with seats for six.

Oliver Maki opens in February 2016 at 33 Dean Street, London, W1D 4PP. Keep up with their news on Twitter @OliverMakiUK