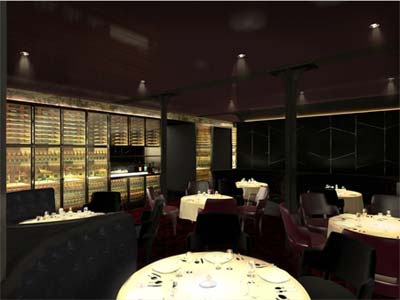 Come September, City workers will have an absolutely massive new food and drink venue on their doorstep. The Old Bengal Warehouse on New Street near Bishopsgate is the latest venture from D&D restaurants and will consist of over 10,000 square feet of bar, restaurant and wine retail. Think what Conran did with Shad Thames and you've got the rough idea.

The 18th century warehouse is the oldest surviving warehouse to be built by the East India Company. The food and drink operation will take over the ground and basement floors and consist of a cocktail bar, fish restaurant, modern British grill eaterie and wine shop.

The New Street Grill will focus on steaks and showcase the British produce alongside excellent wines. Their menu will include native lobster cocktail and double Rib-Eye on the bone. Fish Market will be a more laid-back all-day dining spot, open from breakfast onwards. There'll be a fish of the day dish and a seafood bar with a wide selection of English wines. Both restaurants will have outdoor seating in the warehouse's walled courtyard.

Old Bengal Bar will be a cocktail bar run by head mixologist Milos Popovic. Drinks will include Black Velvet and the lesser-known Courtney Love and will have its own terrace. And finally, the New Street Wine Shop will specialise in wines from Bordeaux and Burgundy and feature a bookable space for wine tastings and dinners and an enomatic wine dispenser for samples.

22/8/12 - We popped in for a hard-hat tour of the site and it's going to be quite different to other D&D restaurants. Only the Old Bengal Bar and New Street Grill will be linked together - both the Fish Market and Wine Shops will have their own entrances.

There's going to be a lot of nice outside space here too. There'll be a smoking terrace outside the bar and a non-smoking terrace outside the grill. We tried out some cracking scotch eggs and sausage rolls - and like the sound of the mixed grill which will include a double pork chop, Barnsley chop, sausage (made exclusively for them) and eggs. They're also hoping to get a reputation as a good Sunday Lunch spot.

The Fish Market with its wide marble bar for counter dining is going to be a popular spot - and open from breakfast - while the Wine Shop with its enomatic machines will also be putting on wine classes at weekends. And ex-Claridges bar manager Milos is promising lots of hand-carved ice for the cocktails.