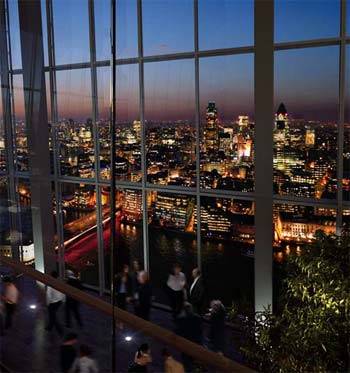 Among 2013's most anticipated new openings are those in the massive column of steel and glass that's now towering over London - the Shard. Plans for the restaurant from Rainer Becker and Arjun Waney (also behind Zuma and Roka) are now being revealed, along with its name - Oblix. The name we're presuming refers to the shape of the Shard, unless we're going to see an "Asterix" restaurant appear later...

This restaurant will be on the 32nd floor of The Shard, and will be split into a rotisserie and grill (with a lounge bar attached). It'll have British and European ingredients and influences, but will mainly be inspired by New York grills, as well as serving slow roasted joints and wood-fired breads and pizzas.

One rather fun innovation is the interactive sommelier station - where your table will be able to gather and taste the wines that you'd like paired with your meal. This area will also be used for masterclasses and tastings.

Elsewhere - there will be a lounge bar with live music, serving cocktails with hand-chiselled ice from purified ice blocks. The bar will also be open all day for dining with a full menu available for lunch, brunch and dinner.

Design-wise, the focus will be in making the most of what should be one of the best views in London. We'd like to say - having been up it this week - just how amazeballs that is, but the tower was shrouded in cloud and we couldn't see a thing. But we're sure it's pretty fantastic.