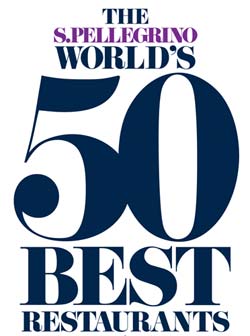 World's 50 Best Restaurants Awards has become a key international fixture in chef's calendars (we tell you why here). Just as you shouldn't expect to see chefs in their kitchens when Le Bocuse d'Or is going on in Lyons, similarly many of the best chefs in the world have been trawling the streets of London over the past few days.

The night before the awards, this posse of world class cooking talent ate at the hotter-than-hot Pollen Street Social, the day before the restaurant's official launch where the menu included Fowey oyster ice-cream with pearl branded, cod and smoked eel and silver dust. Last year they did the same with Nuno Mendes' almost-opened Viajante. Tonight they're off to eat out at a top secret location at a secret after hours dinner served up by The Young Turks James Lowe and Isaac McHale.

So to the awards themselves, ‘The list doesn’t claim to be 100% comprehensive or definitive,’ said Restaurant Magazine’s editor William Drew as he announced them at the Guildhall. ‘We see it as a survey of current tastes and a credible indicator of superb restaurants around the world.’

Well it wasn’t a great surprise to see that Noma had retained its top slot. Rene Redzepi’s Copenhagen restaurant was a hugely popular winner and Rene gave a suitably sweet speech bigging up his colleagues watching the awards online back in Denmark.

As for Britain, there was a 25% rise in restaurants in the Top 50 (yes we know that’s only an increase of one). Claude Bosi’s Hibiscus rose from 49 to 43 while Fergus Henderson saw St John rise from 43 to 41. The highest new entry was also a brand new British entry to the list - London’s The Ledbury. Brett Graham’s restaurant is constantly namechecked by the chefs Hot Dinners has interviewed over the past year or so, all of whom rave about the cooking there.

Unfortunately it wasn’t such a great night for Heston Blumenthal who saw The Fat Duck drop from third to fifth position.

Other key awards included One to Watch, which went to Stockholm’s Frantzen/Lindeberg which was described as an award for the restaurant most likely to break into the list in the future. That went to Stockholm’s Frantzen & Lindeberg a restaurant whose rise was described as ‘nothing short of meteoric.’ And the Lifetime Achievement award was presented to Juan Mari Arzak, chef proprietor of Arzak restaurant in San Sebastien, Spain who was given a standing ovation.

Finally, we’d love to have been a fly on the wall for the moment when Jay Rayner and David Chang’s eyes met across the crowded room at the Guildhall. The two haven’t met since their barbed exchange on Twitter last month. Did they kiss and make up? Who knows…