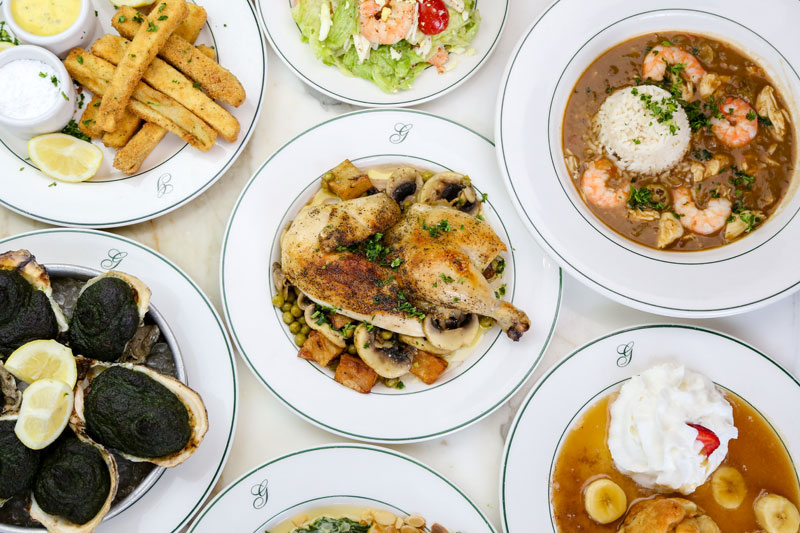 Here’s a very special one for lovers of everything from the good old USA. For three days, Londoners will be able to temporarily transport themselves to New Orleans's legendary Galatoire’s, an elegant-yet-raucous restaurant popping up in Mayfair.

The pop-up will be operating out of five-star hotel The Beaumont, setting up in Corbin & King’s Colony Grill Room (one of Hot Dinners' personal fave spots in town). There, it’ll be doing its best to transplant its notoriously entertaining atmosphere to Central London, which looks to be a sort of blend of high society rules (in their original restaurant, jackets *must* be worn after 5pm) with rambunctious New Orleans vibes. I.e. get merry, while looking smart.

Onto the food. Given where they hail from, it’s understandable that Galatoire’s is big on their fish, which comes served with a high end, Lousiana twist. That means dishes like Gulf Fish Amandine, Crabmeat Maison and Shrimp Remoulade. If fish isn’t really your thing, you won’t be completely left out, though. Based on their other menus at the Beaumont (more on that in a second), there ought to be a few classic meat dishes, like steak, but it is overall a very seafood-led menu.

The food should be very good, too, considering the numerous accolades Galatoire's has earned itself - including a spot on The NY Times Top 10 World’s Greatest Restaurants.

Outside of the popup, Galatoire’s will also be running “wine dinners” with a few other menus, in The Beaumont's Loto Rooms. There, you’ll have the chance to try deep fried Crab Beignet, Lobster a la Queen and Fried Shrimp Sardou paired with bottles from Louis Jadot, Veuve Clicquot and Daou Vineyards. It won’t be cheap though, with a seating costing £112.50 for five courses.

The whole thing looks and sounds very memorable indeed, particularly if you decide to take your USA-themed weekend to the next level by catching the NFL New Orleans vs Miami game in Wembley, which the pop-up has been timed to coincide with.