New burger chain from Beirut BRGR.co to open in Soho 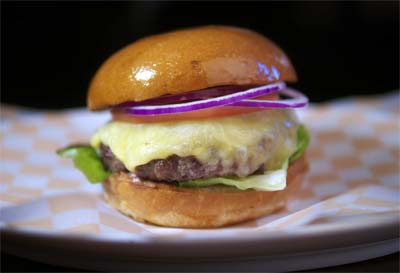 The central London burger mania continues with another burger joint opening up in Soho next week.

This time it's the turn of Beirut chain BRGR.CO which'll be opening up on Wardour Street. The menu will be based around the size of the burger, so you can order a 4oz (£4.95), 6oz (£6.95) or 8oz version (£8.95). There's also a 6oz Butcher's Cut served medium rare to medium at £7.95 and an 8oz steak burger served medium rare at £13.95. They'll be using 28-day-aged beef from the Duke of Buccleuch Estate in South West Scotland and you'll have the option of four different cheeses - vintage cheddar, gruyere, Provolone or Danish Blue.

There are also two types of veggie burger - Falafel and a Mediterranean Veggie's Burger, and a dog (of course) called The BRGR dog for £4.50 which comes with added chili con carne for an extra £2.95).

Sides-wise there are no less than five different types of chips to choose from, ranging from regular and cheese through to messy and Flamin' Chili Chips and Parmesan Truffle Fries (all £3.85).

On the drinks front - homemade lemonade comes with your choice of vodka, gin, rum or bourbon, the beer is American Huber and there are a handful of wines as well to choose from.

Around 50 people can fit into the new restaurant, in a room that will be decorated with "character cow heads" by local artists that they'll be auctioning off for charity every month. It'll be completely no-bookings, but takeway and local delivery is also planned if you're in Soho and need to lunch 'al desko'.

After the Soho opening, they're already planning to expand, with a King's Road outlet opening next year.

BRGR.CO will be open daily 12pm to 11pm at 187 Wardour Street, London W1F 8ZB from Saturday 1 December 2012. You can follow them @BRGRCOSOHO