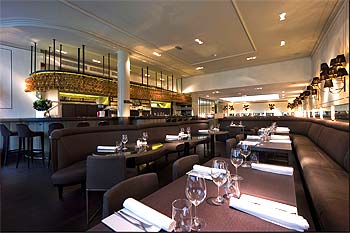 At a recent party to launch his new Marylebone restaurant, chef Bruno Barbieri was surrounded by Italian journalists all eager to find out why on earth one of their top chefs had upped sticks to move to London. The presence of so many people from the Italian media shows what a big deal Bruno's restaurant Cotidie is going to be. It's the equivalent of Michel Roux Jnr closing Le Gavroche and moving to Milan.

Most recently the chef at Villa del Quar in Verona, Barbieri got his first two Michelin stars when he was executive chef at Il Trigabolo in Argenta. It almost goes without saying that he's cooked for some pretty impressive diners - including Pope John Paul II. When he took over the Arquade restaurant at the Relaix aux Chateaux Villa del Quar he also retained that restaurant's two stars.

Hot Dinners grabbed some time with Cotidie's owner, financier-turned-restaurateur Francesco Ortone to find out what Londoners can expect when Cotidie opens on Monday 5 March. "I've been working in the city for 12 years," he told us. "I always had a strong passion about food - but for me it wasn't just opening a restaurant I really wanted to open the restaurant. As a matter of coincidence, Bruno is the close friend of a friend of mine and he wanted to move away from Italy - he thought at this specific time it wasn't giving him the radical opportunity he was looking for."

"Bruno's been working in Italy for the last 30 years and he wanted to challenge himself outside of Italy. There aren't many Italian Michelin-starred chefs who open restaurants abroad. There are a few Italian chefs that achieve Michelin stars in London but none that have come to London with such a strong background, trying to replicate the success they've had in Italy."

As to what'll be on the menu, according to Francesco "Bruno tells me that he wants people to feel like they're eating in his house. His strength is that he proposes a very traditional Italian cuisine with a modern presentation. But the flavours, ingredients are very traditional. 70% of our ingredients here are coming from Italy except the meat - Angus beef is the best beef in the world and Bruno was already using that beef at his restaurant in Italy. The same goes for the Scottish salmon. But apart from a few strong ingredients that the UK is able to provide, most of the other ingredients are coming from Italy."

When it comes to the issue of price, "[Bruno] was very expensive in Italy," explains Francesco. "Two Michelin starred in Italy is probably even more expensive than it is in London. He said I want to come to London and give the opportunity for most people to come to my restaurant and enjoy my food without it being to expensive - now is not the time for people to spend £150-£200." So the tasting menu will cost £65 for 4 couses, plus an amuse-bouche, cheese course, sorbet and dessert.