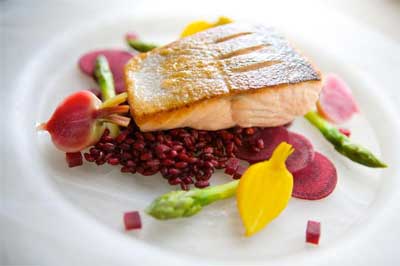 Canvas by Michael Riemenschneider opened in January in Marylebone as a "build your own" tasting menu restaurant. Earlier this summer, that restaurant closed - but Canvas is already about to make a return in an even bigger location (which will now seat 60 - up from 20 at the original).

Now called Canvas Chelsea, the new restaurant takes over what used to be Le Cercle and will carry on the same concept that Canvas settled on - a three course á la carte or twelve course tasting menu. That will include dishes like sea bass with fondue, caper berries and navet, vension with solferino, walnut and chocolate and lemon pudding with caramel, cream and olive oil.

The new restaurant will also add an "experimental cocktail bar" where head barman Kamil Patryk (from the Polo Bar and the Westbury) will "will serve cocktails that remain in tune with the menu via molecular mixology". Chelsea also adds a chef's table (seating 6) overlooking the kitchen and the restaurant.