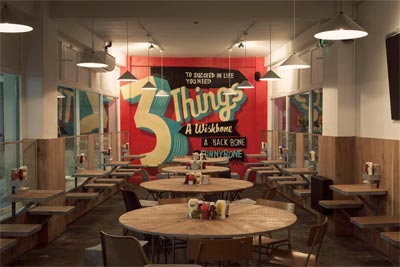 We know that Scott Collins of MEATliquor has been involved with Wishbone for a while, but now it's more official as MEATliquor formally takes on the reins - including a revamp of the menu.

Alongside the Thai style thighs and Korean wings, Yianni Papoutsis is putting his hand to the menu, adding the MEATliquor buffalo chicken burger (covered in hot pepper sauce and a blue cheese dressing), plus more chicken and vegetarian dishes will be coming to the menu. These will be available from Thursday April 24.

All this and a second Wishbone is planned later in the year. We'll have details on that as soon as we can pry them from MEATliquor.