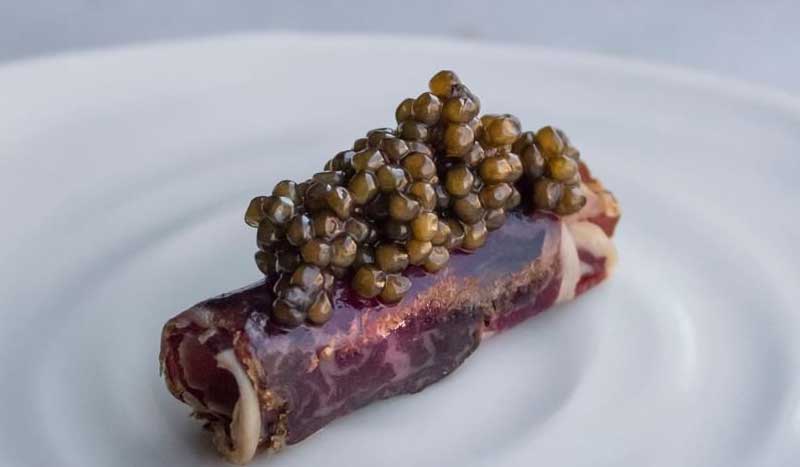 In a nutshell: Swanky all-day restaurant and cocktail bar in Mayfair

Summing it all up: Top mixologist Tony Conigliaro is teaming up once more with chef Rob Roy Cameron to open a two-floor restaurant and bar on Albermarle Street

In the years we've been doing Hot Dinners, London's bar scene has really come of age - now rivalling anywhere else in the world for creativity and passion. And Tony Conigliaro has certainly played a starring role in that rise. We've been following him ever since the early days of the Zetter in Clerkenwell and 69 Colebrook Row right up to his most recent opening, the supremely take-it-or-leave-it minimalism of Untitled in Dalston.

Now Tony's heading back into town, teaming up with his longstanding partner in crime - the unbelievably Scottish-named chef Rob Roy Cameron - to open what sounds to be a very interesting space in Mayfair.

Gazelle, on Albermarle Street, is going to be huge, for a start. It's a massive 2,500 sqft space across two floors (1st and 2nd). And it'll be open from breakfast through to late night bar snacks, giving Conigliaro room to experiment with some anti-fogmatic first-thing-in-the-morning drinks. Not only that, but it'll also be accessed by its own private lift with the two floors linked by a spiral staircase. So it'll give that feeling of a private members club - without actually needed a membership to get in the door.

On the drinks list will be some of his classic drinks (Red Amber and the Coral Fizz included) as well as their twists on classics, champagne cocktails and plenty of softs (and tea for the afternoon too).

For the pair, this is their first joint venture where food will get an equal billing along with the drinks. "With Rob, I've been lucky enough to discover someone who works and thinks like me and just gets it," says Tony. "We spent months looking at various sites but knew as soon as we walked into this one that it would afford us the space and scope to really make it into something special for both of us."

The menu, which is now online, doesn't give much away, with dishes like Frozen Yeast; Squid, Jowl, Girolles and Pigs Tails, Manhattan on offer.

Cameron's background is of note too - he kicked off his culinary career as a pastry chef at El Bulli and then headed up the opening team for Ferran and Albert Adrià's 41 Degrees in Barcelona. Back in London, he worked with Tony on both Untitled and Bar Termini. Sounds like a dream team to us.

Where is it? 48 Albermarle Street, London W1S 4DH

How to book: Email reservations@gazelle-mayfair.com