Mayfair pub The Running Horse gets a big revamp and a new cocktail bar, The Whip 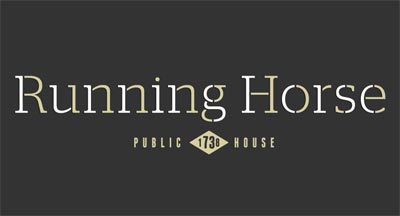 The Running Horse in Mayfair, which has been around since 1738 has had a rather major wash and brush up and re-opens soon under new owners James Chase of Chase Distillery and Dominic Jacobs, ex bar director of Sketch. The two of them have been focusing on sourcing UK suppliers for the pub, and keeping a very British feel while also saying they've been influenced by NYC bar of the moment, Dead Rabbit Bar.

The two have been keen to restore the pub to its former glories, bemoaning the lack of "real pubs" in the area. They're also taking full advantage of the existing name with everything in the pub having a very race-horsey theme from the food to the decor.

In the kitchen is Andrew Justice, who made it to the quarter finals of MasterChef the Professionals in 2010 and was most recently at the Lockhart. He'll be serving up regularly-changing seasonal dishes, kicking things off with the Chopped Burger with Jockey whips (chips) alongside Jacobs Ladder beef ribs, "cooked low and slow".

Drinks-wise, there will be a revolving selection of seasonal beers and, of course, plenty of Chase spirits on hand. The Running Horse will be the first site selling them "on optic".

But while there's a strong focus on pulling together a good boozer downstairs, Chase and Jacobs are also taking the opportunity to launch a new cocktail bar above the pub. The Whip will open on the first floor and, sticking to the horse theme, will be upholstered in racing jockey silks with loads of references to the Kentucky Derby. The bar will focus on the julep, seen as the favoured drink of the Derby, with a julep menu focusing on seasonal flavours and home-made preserves, all served in pewter tins. Tables can be booked in the bar in advance too.

James Chase says they're hoping to deliver something "game-changing - a new experience for London that allows us to showcase a few forgotten techniques along the way."

The Running Horse opens at 50 Davies Street Mayfair, London W1K 5JE on October 22. For more information, follow them on Twitter.