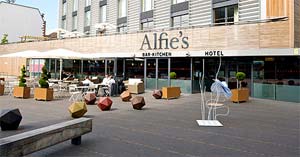 Big news today with the announcement that Masterchef's Gregg Wallace is opening a restaurant at the Bermondsey Square Hotel. The 80 seat restaurant (with a further 100 seats outdoors) will be called Gregg's Table and will take the place of the hotel's former restaurant Alfie's Kitchen. We hear that their current head chef Kristian Kum, who joined the hotel last summer, is expected to stay on to run the new restaurant.

As for the food, the menu will feature Wallace's take on the food of his childhood - 1970s classics such as mulligatawny soup, lobster thermidor, T-bone steak and for dessert knickerbocker glory and banana split.

“I love the SE1 area, it’s where I grew up, therefore it seemed a perfect choice for the launch of Gregg’s Table," explains Wallace. "In keeping with The Bermondsey Square Hotel we have designed Gregg’s Table around 1970s designs and kept the menu true to the old favourites."

This will be Wallace's second restaurant - his opened his first, Wallace & Co in Putney two years ago.