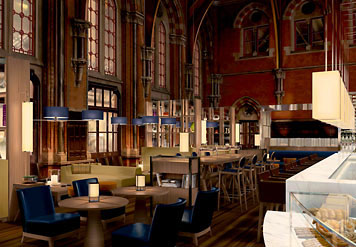 Update - see our preview of the Gilbert Scott here.

There's still no word yet on who will take on the main restaurant at the St Pancras Renaissance Hotel at King's Cross, but Marcus Wareing today announced he'll be opening a 120-cover brasserie called The Gilbert Scott there in February 2011.

Wareing said of the venue; 'The minute I set foot in St Pancras I just knew it was for me; the building is breathtaking and has an amazing sense of time and place that I had to be a part of.'

The Michelin-starred chef won't be at the helm of the St Pancras restaurant - the General Manager will be Chantelle Nicholson who has been with Wareing since 2004 at both The Savoy Grill and Petrus. 'This is not another Marcus Wareing at the Berkeley,' Wareing said. 'There can only be one, it is a very different venture and immensely exciting...It's about bringing a bit of Mayfair to an area of London that needs regeneration.'

The brasserie, named after the building's Victorian architect, will also feature a 52-seat bar.

The hotel's owner, Harry Handelsman said; 'With this endorsement and the splendour of the restored St Pancras Renaissance Hotel to its former glory alongside Chantelle’s experience and commitment to quality, London will experience the most exciting event on the hospitality scene in 2011.'