[SIGPLUS_EXCEPTION_SOURCE] Image source is expected to be a full URL or a path relative to the image base folder specified in the back-end but /blog/2014/marcusnews/gallery is neither a URL nor a relative path to an existing file or folder.
0
Shares

Marcus Wareing at the Berkeley reopens after redesign as MARCUS 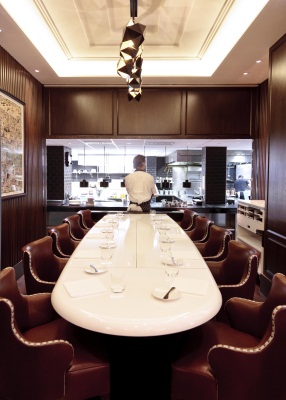 He's known for being one of the most exacting and demanding chefs in the business, so when Marcus Wareing announced he was undertaking nothing less than a total rethink of his eponymous restaurant it was news indeed. The plans for Wareing's two Michelin-starred restaurant, Marcus Wareing at the Berkeley hotel in Knightsbridge went far beyond the style of revamp that we saw more recently for Gordon Ramsay's Royal Hospital Road place.

Wareing's restaurant was closed for two months while the designers at the Robert Angell Design Studio got to work. You'll know Angell for his work most recently on Lime Wood and Kaspars at the Savoy. And the restaurant has just reopened under the new name MARCUS.

The new look, new name restaurant is something of a 10th birthday present for Wareing's relationship with the Berkeley. It also marks the chef's signing of a second 10 year contract with the hotel. "Over the next ten years I want to do it better than I ever have before," explains Wareing. "I believe there has been a gradual, but genuine evolution in what the customer is looking for in today’s fine dining offering and we are now moving away from the more formal styles of service."

As for the team at the restaurant, Wareing and Head Chef Mark Froydenlund continue in their roles while front of house sees the return of Daniel Greenock, after a year at Eleven Madison Park in New York, as Restaurant Manager.

The designers said their remit was to "make the restaurant more accessible" and "strip away some of the barriers that some people think about fine dining." In practical terms the restaurant can now seat more diners, increasing from its current 70 to 105. "The look is a complete shift," Chantelle Nicholson, Group Operations Director for Marcus Wareing Restaurants told Hot Dinners. "It's very modern and refined. There's going to be a lot of contemporary art - we're bringing a sense of London and of Marcus into the room."

As for menus, they've introduced the option of ordering just one course at lunch (from £12), "so you can pop in for half an hour and have a main course," explains Chantelle. There's also now a range of small tasting plates ranging in price but starting from as low as £6 - "a little something to share before the meal." A la carte now begins at £60 for two courses, £85 for three and £95 for four. The 8 course Taste menu at MARCUS will start from £120.

MARCUS is now open at the Berkeley hotel. Keep up with their news at www.marcus-wareing.com/