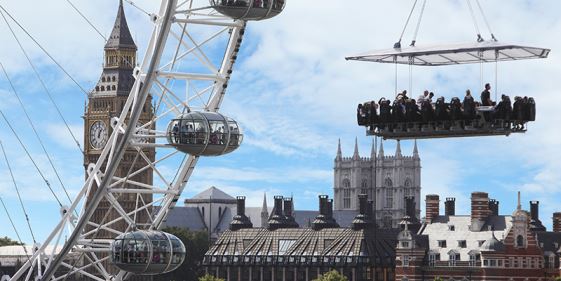 If eating out at one of London's high rise restaurants has gotten a little stale for you - how about eating dinner suspended 100 feet in the air?

Anyone who saw the recent Heston series will recognise Dinner In the Sky - a platform that's winched high into the air, complete with room for 22 diners and a chef.

It's previously been hired out for corporate events but this summer will be the first time anyone in London can apply to eat on it.

Over the summer London in the Sky will feature five chefs from London’s best Michelin-starred restaurants, getting them to recreate their signature menus.

Breakfast will cost £50, Taittinger and canapé flights in the afternoon and evening will be £75 and the full blown dinner will cost betweeen £200 and £250 per person. The dinners will kick off with a Champagne Taittinger reception followed by a selection of signature dishes (three courses at lunch, five at dinner) paired with hand chosen Villa Maria wines.

London in the Sky will take place at Canary Wharf, Wood Wharf Business Park, 100 Preston’s Road, London, E14 9SB. It will run from the 12th to the 21st September 2014 (inclusive). You can buy tickets and see dates for the various chefs on their website. There are two sittings for breakfast lunch and dinner.

And - because we know you'll be wondering - the platform is lowered after each flight for what they're delicately referring to as 'comfort breaks' so you can go to the loo.