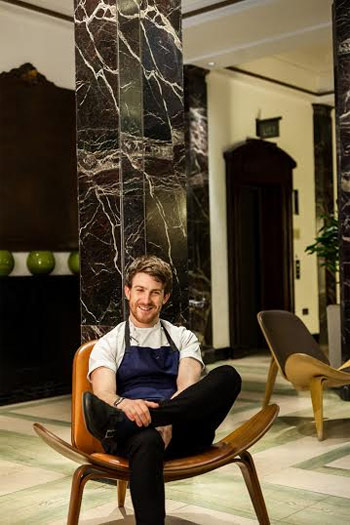 There's been a huge amount of interest in the restaurant planned for Bethnal Green's Town Hall Hotel ever since Lee Westcott was named as the chef whose restaurant would be replacing Nuno Mendes' Viajante, with backing from none other than Jason Atherton.

Now, following on news of the new Peg and Patriot bar in the hotel, we have full details of Lee Westcott's new restaurant, which will be called Typing Room and opens next month.

The new restaurant will seat 40 and "offer a refined European menu showcasing and focusing on the British seasons and produce". So in practice, this will mean dishes that include:

Alongside the á la carte menu of five snacks, five starters & five mains, there will be six and eight course tasting menus.  Westcott will also be in charge of the menus for the Peg and Patriot bar and the Corner Room too. Westcott himself has quite an impressive background, having previously worked with Tom Aikens and then with Gordon Ramsay at Claridges as well as spending time in New York's Per Se and Noma before running Jason Atherton's Hong Kong restaurants 22 Ships and Ham & Sherry.

The name of the restaurant comes from the Town Hall’s original typing room "where all communications from the mayor, council and judicial system were put to ink".  It's being designed by Ariana Rees Roberts and fans of the previous restaurant will be pleased to hear that it will also include an open kitchen, which was such a big feature of Viajante.

Typing Room will open on 16 May 2014 at Patriot Square, Bethnal Green, London, E2 9NF. It will be open for lunch Wednesday – Sunday and dinner Wednesday - Saturday. They'll be taking reservations from 28 April 2014 at reservations@typingroom.com. For more information, visit their website  or follow them on Twitter @TypingRoom