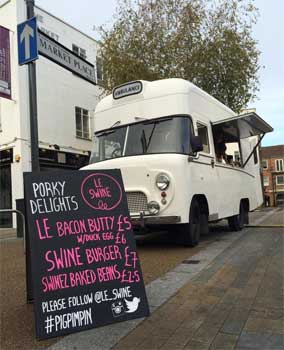 It's not often you hear of a top chef in London getting down and dirty in the street food scene, but that's exactly what's happened with Le Swine. It's the brainchild of chef James Packman who joined Bruno Loubet's brigade at Bistrot Bruno Loubet when he first opened in London, working his way up through the ranks.

It was James's cheeky pilfering of Bruno's own bacon sarnie one morning at work which triggered the duo's search for the perfect bacon butty. "I was blown away by just how good a bacon butty could taste," explains James. "Unfortunately, Bruno Loubet was not impressed with his missing bacon butty, but after the red mist had settled, he was encouraged by my excitement to take the ultimate bacon butty to the streets of London and beyond."

The pair have spent a year working on the concept, coming up with every component themselves. Le Swine uses a homemade milk and onion bap, bacon butter, old fashioned middle bacon, fried duck egg and offer folks a choice of their own swine tomato sauce or mushroom ketchup. Le Bacon Butty costs £5, but there's also a Swine Burger at £7 with gammon patty, fried duck egg and swine apple chutney. Or you could try a pot of slow cooked pulled porky beans for £2.50.

As for the bacon itself, a contact put them in touch with a butcher up in Lancashire using pure breed pigs, Berkshire and Middle White which are reared outdoors, free to exercise and root at will. "Their philosophy is simple, they believe that happy, healthy pigs kept naturally produce superb pork. We are with them on this, as the old fashioned middle bacon we use, is like no other! Plus it’s nice to know, if we are going to eat meat, that it comes from small scale farmers who truly care about their animals."

If all this is now making you look forlornly at your own breakfast, you can track down Le Swine in Paddington on Thursdays, in the school yard at Broadway market on Saturdays, Brentford market on Sundays and once a week in Broadgate Square. Look out for their revamped ambulance and the aroma of bacon.

Keep up with Le Swine's news and schedule on Twitter @le_swine