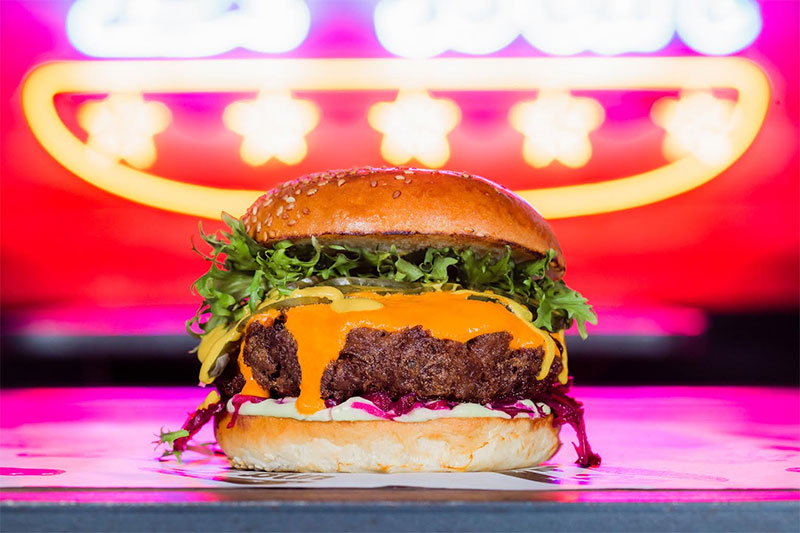 If you’ve been meaning to get down to Birthdays to nab one of Le Bun’s decadent burger dishes, then good news - they’ve decided to extend their residency to the 2 April.

Not only that, but they’ll be adding a few new dishes to their repertoire, including the joyfully-named Fucking Vegans (pictured above), a “proper vegan burger”. For £8, those avoiding animal products can enjoy a hearty cauliflower fritter patty, served with fermented habanero buffalo sauce and avocado mayo.

But why the name? As chef Andy Taylor explains: “I felt sorry for those poor vegans drowning in quinoa, so I wanted to make a vegan burger with banging ingredients that I'd actually love to eat. I didn't want to use fake meat, tofu or meat replacement products. If you want something that tastes like bacon, eat fucking bacon. So I went for stuff that's naturally delicious like avocado, buffalo sauce, pickles and fried cauliflower. They just happen to be vegan.”

Well put. Vegans will also be able to enjoy an updated wine list with a host of vegan, biodynamic wines. There’ll also be the decadent deep fried Chilli Cheese Bites with Basque Ketchup for £5, though it sounds decidedly less vegan than the new burger. And, of course, the usual staple of burgers including the wonderful Le Truffle Double Double (two aged rare breed patties, truffle veal jam, truffle mayo and American cheese in brioche).

Their decision to stay put at Birthdays a while longer is partly due to their ongoing hunt for a new permanent venue, which will make them the latest in a flurry of roving vendors to set down roots. In the meantime, more new menu items are expected to appear, so fans are advised to keep a close eye on their Instagram page.