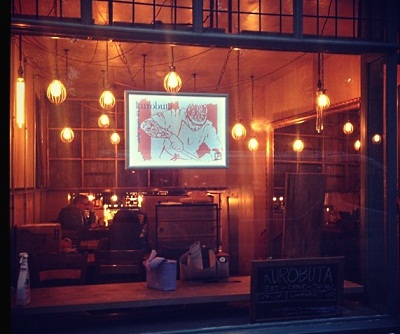 We've already talked about the Japanese pub being opened by Scott Hallsworth (ex Nobu and Wabi) by Marble Arch. Well while work on that continues, Scott has created a pop-up version down on the Kings Road.

The Kurobuta popup will be open all day, serving up breakfasts of Japanese pastries such as yuzu tarts and kabocha bread and Monmouth coffee – think East meets West. There'll be snacks of flamed edamame or crunchy rice senbei crisps with avocado-jalapeno dip.

For lunch and dinner you'll be able to choose a range of sushi and salads such as yellowtail sashimi and crispy skin duck salad, there'll also be dishes from the robata, including tea-smoked lamb, free-range chicken kushi-yaki and Scott’s BBQ pork belly in steamed buns.

As you'd expect from someone of Scott's background the sush is bound to be pretty fine with soft shell crab tempura maki and salmon gravadlax maki on offer. There will also be a takeaway option with freshly prepared five-minute bento boxes too.

Drinks will range from sake cocktails to a Kirin Frozen Head beer which comes ice-chilled and topped with a frozen head of foam.

The Kurobuta pop-up opens on Wednesday 9 October 2013 at 251 Kings Road, London SW6 2EB and runs until the end of the year. To make a reservation email reservations@kurobuta-London.com or call 020 3475 4158 (telephone line may not yet be live).