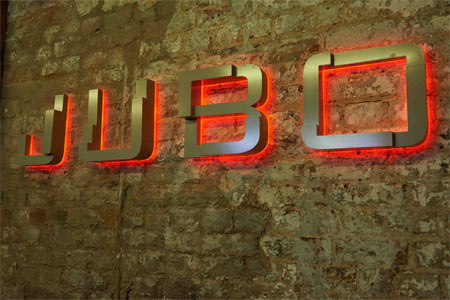 Everyone's looking for the next big trend in food - recently we've had Peruvian, burgers, chicken, pizza (and probably burgers again a few more times) but one we've been keeping an eye out for is the promised rise in Korean food. So far we've had Bibigo and Gizzi's K-Town pop up and now there's a newcomer opening in Shoreditch.

Jubo will be opening at the Bedroom Bar in Shoreditch, specialising in crunchy Korean fried chicken wings and strips- coated in either soy garlic or hot sauce. Headed up by Jubo founder LK Foong they're aiming for a street food style canteen with a menu by Stephen Parkins-Knight, who has worked in various places throughout London including The Ivy and who created the menu at Dishoom too. The Jubo menu will also feature home-made kimchi, pickles, kimchi-slaw, and steamed buns served with either pork belly, slow braised beef or roasted portobello mushrooms.

For drinks, there will be chilled Korean Soju and Korean Hite beer. They say they're "looking to bring Korean trend of ‘Anju’(drinking food) to London offering the tastiest Korean fried chicken into the early hours."

Jubo is open now at the Bedroom Bar at 68 Rivington St London, Greater London EC2A 3AY. For more, follow them at www.twitter.com/jubolondon.