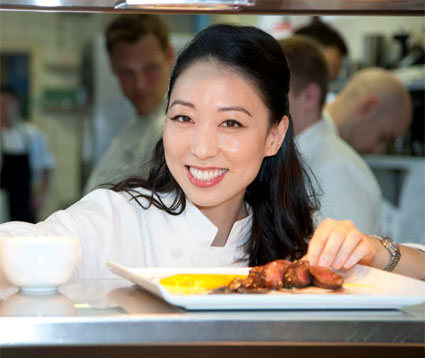 Celebrity chef (and Gordon Ramsay alumnus) Judy Joo is opening her own restaurant in Soho, which will be an informal Korean styled restaurant.

What you need to know about Jinjuu

The name is Korean for "pearl".

It has a celebrity chef in charge. Judy Joo made her name initially working at Gordon Ramsay's restaurants before starting a TV career which took in various incarnations of the Iron Chef programme. She's also a regular on the US Food Network and is bringing her Korean cooking show to the UK, Korean Food Made Simple (which starts on the UK Food Network in January). She's previously also been the Executive Chef at the London Playboy Club.

The restaurant will offering Judy Joo's "interpretation of Korean street food." So that means Korean sharing platters and side dishes, barbecued meats wrapped with lettuce and Kimchi carnitas disco fries (slow cooked pulled pork with kimchi on fries). And there will be Korean tacos, fried chicken (of course), kimbab Korean sushi rolls and pajeon pancakes. We'll get some more details on the menu soon.

The ground floor will be a bar with the restaurant in the basement. Upstairs will be focused around snacks and cocktails while downstairs will have a "food-focused dining experience". Expect plenty of counter dining options and bigger banquettes for groups.

When does it open? December (and there's a preview at Fortnum's on October 9)