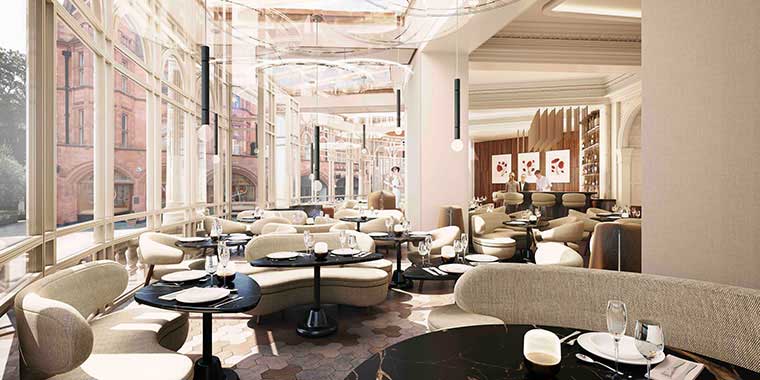 We've finally got more information on the new Jean Georges restaurant opening at The Connaught next week. In case you're only now playing catch-up, this is one of the big openings of the year, taking over the space at the front of the Mayfair hotel which was previously occupied by Espelette.

Vongerichten is joining Hélène Darroze and her two-Michelin star restaurant which is on the other side of the hotel. By contrast to her restaurant, the new place will be a more informal spot - they're describing it as a relaxed neighbourhood restaurant. Open all day it'll run from breakfast through to dinner.

If the name Jean-Georges Vongerichten doesn't ring any bells with you, he's responsible for 30 restaurants worldwide in cities such as Paris, Shanghai and Tokyo, including the three Michelin starred Jean Georges in New York. If it's ringing vague bells that's because this is a return to the fold for Vongerichten, who previously ran Vong restaurant at The Connaught's sibling hotel The Berkeley, which closed at the end of 2002.

"I hope to create a new restaurant at The Connaught that reflects both my signature farm to table cooking style but with a few surprises," says Vongerichten . "The Connaught was the first London hotel I ever stayed in and continues to hold a special place in my heart."

So, we hear that you can expect a range of the chef's classic dishes including his black tuffle and tuna and wasabi pizzas. If you've ever been to his vegetarian restaurant ABC V in New York there'll be dishes from there on the breakfast menu. We hope that means the dosas with maple syrup are heading our way.

If you live or work nearby and just want to grab and go, the restaurant will offer dishes to take away – for the first time in The Connaught's history. We're also told he'll be paying homage to British food with his own take on Fish and Chips and beans on toast! Everything will be a la carte menu and there'll be no tasting menus.

Design-wise, look out for the restaurant's artist's corners which have been created with works from Louise Bourgeois and Sean Scully.

What: Jean-Georges at the Connaught