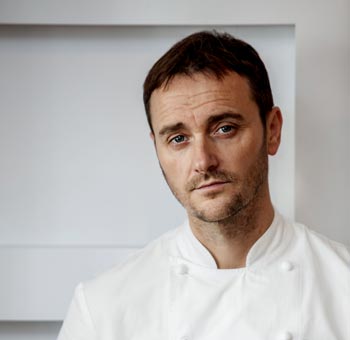 We reported it a month ago in Coming Soon, but this week we got confirmation that Jason Atherton will be responsible for the restaurant at Ian Schrager's new London Hotel, the London Edition.

"The London Edition will be an amazing hotel," said Jason who will be Executive Chef for the hotel. "I am so proud to partner with Ian Schrager, he is a legend."

The new hotel, which sees a sumptous reworking of the building where the Berners used to be off Oxford Street, will feature a dance club, two bars, a 24-hour gym and 173 luxurious wood-panelled rooms and suites akin to cabins on a private yacht.

Atherton's restaurant will be the Berner's Tavern -off to the right of the lobby. It'll be furnished with banquettes in chestnut mohair and taupe leather and round, rift cut bleached oak tables with chandeliers inspired by NYC’s Grand Central Station suspended over the tables. The  restaurant will be a big all-day dining brasserie with Phil Carmichael as chef. "Phil was the first chef I employed at Maze," explains Jason. "We want to continue the fantastic dining experience we achieved there.”

As you would expect, the bar at the London Edition is also bound to be a new hot haunt. Situated at the back of the hotel, The Punch Room will be an oak panelled den, inspired by English country house libraries and nineteenth-century London's private clubs. Apparently it'll be a cocktail bar without a bar, where every drink is served on a silver salver to guests in club chairs.