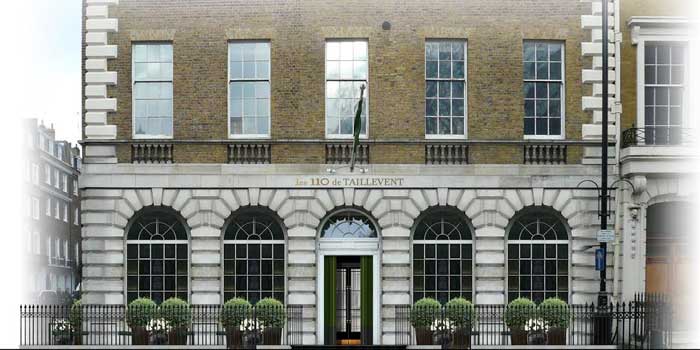 The iconic Parisian restaurant Taillevent has set its sights on London, opening this summer in Cavendish Square.

Les 110 de Taillevent is the more relaxed incarnation of the two Michelin-starred restaurant which opened its doors in Paris in the aftermath of the second world war. The Paris branch opened in 2012 and the 110 in its name refers to the number of wines which are available by the glass.

The menus will be similar to Paris, so expect every dish - four each available of starters, fish, meat, desserts or cheeses - to be paired with four wine choices. That menu has been created by Alain Solivérès, Executive Chef Director of Taillevent Paris, and everything starts with breakfast which will be paired with hot or cold drinks.

Interior architect Pierre-Yves Rochon, who created the decor at the Parisian location (and who in London was responsible for the new look Four Seasons and the redesign of the Savoy) has designed 110 de Taillevent London, which apparently "draws on the green of the vine, rich earth tones and oak-barrelled wine casks."

110 of Taillevent opens in September 2015 at 16 Cavendish Square London W1G 9DD. For more, follow them on Twitter @110london

From earlier - our original interview:

Hot Dinners sat down with Laurent Gardinier, one of the three directors of the Taillevent Group, in November 2014 for an exclusive interview to talk about their plans for London (and beyond).

First things first, is the story correct that Taillevent is opening in London?

"It's true. It's going to be called the 110 of Taillevent or de Taillevent - we haven't decided yet. We plan to open late May or June. The most cautious thing is to say we might open by the middle of the year."

The two parts of DNA that make up Taillevent are wine and food. One key part is that we rank the wine by price, we have four categories of white selected by price and then we pair that with the food that we served. It works very well in Paris which is why we decided to open it in London."

And where will it be?

It's located on Cavendish Square (in a building that used to be a branch of Coutts & Co)." Laurent goes on to explain that various applications are still pending regarding the property. "Westminster haven't agreed on everything and we have negotiated day after day to comply with what they want. Westminster City is as tough as Paris.

Can you tell us how (if at all) the London Taillevent might differ from the one in Paris?

The site is quite different because it's a listed building. It's a bit bigger than we have in Paris. Regarding the menu, the idea is to keep the same kind of menu as we are serving in Paris, because all the dishes that are served at 110 Taillevent are made under the control of the chef of Taillevent. So we're going to keep that kind of selection. It's simple but high end classical French food.

And of course you have an extraordinary focus on wine with so many available by the glass and and every dish having wine pairings suggested with it. Do you have any plans to change this for London?

As far as wine, as with Paris we don't propose only French wine - we have wine from all over the world. We think our duty is to have the best, wherever it comes from. We're a French restaurant regarding the food, but we are international regarding the pairing of the wine and the food. But maybe we'll have as much British wines as possible. We don't right now have a lot of British wine on our wine list but we can of course have them in London.

Do you have a chef in place?

We'd like to have a chef who has already operated in London and the same goes for the manager of the restaurant too, but the hiring of those people is still in process.

And what about the design?

The designer is Mr Rochon who did the Savoy Hotel in London. He's been working with our family for more than 30 years. The idea of the design is to bring the materials that are linked with wine - so we focus on oak - and the walls are lined with empty wine bottles lit from below. We try to have a modern look based on classical raw materials.

So why did you pick London as the first city to expand the Taillevent brand to?

We think that Taillevent is made for big capitals - the quality that we bring needs to meet with people that understand food and wine pairing. London was a natural prospect for us. The London scene in terms of gastronomic is one of the most important in the world by its diversification and it's so important to succeed in London. We know that the British people love wine so it was obvious as long as we'd decided to move out of France to start the new Taillevent in London.

Do you think the restaurant scene is markedly different to that in Paris?

We come here with a very humble vision. We know that French market is different from the English market. In Paris the business lunch is more of a habit than what you have in London. But it's very hard for French restaurants to make more than two sittings for dinner. In London, lunch might be a little weak in comparision to Paris, but the dinner we plan to have 1 1/2 sittings, so we'd have to adapt the service and menu to the English market. We want to learn from London. We don't want to be arrogant.

Will London be the first of many cities where we'll see the Taillevent brand expand?

One project that is not as advanced as it is in London but we would like to go to is Japan. Taillevent was settled in Japan about 20 years ago (They had five wine stores there). We're out of it now but we want to come back. And if it works, then of course we'd like to be in New York.