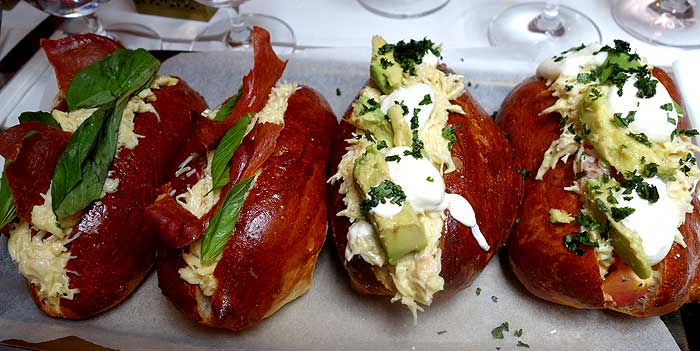 Just opened, very much on the QT in Mayfair is House of Crab, a short-term pop-up by James Chase of Chase distillery and Dominic Jacobs - the folk behind The Running Horse pub in Mayfair. This new seafood spot, where Chalet (aka Princess Diana's favourite restaurant) used to be, will be here until the end of January, after which the building it's in faces demolition.

As the name suggests, the menu focuses on crab, Salcombe crab to be specific which is where James has holidayed since he was a nipper. There are four crab brioche rolls on offer:

Sides include crab cake, samphire and fennel slaw and seaweed fries and, if you want, you can get a roll, pot of bisque, fries, slaw and mac and cheese for £20. They also do takeaway.

There are plans to open for brunch in a few weeks time with lobster croissants on the menu, and they've also taken over the space next door with plans for a cocktail bar opening in mid-October, if all goes to plan.

A short cocktail list includes a Crabby Mary made with crab bisque and there's an equally brief wine list and beer selection.

House of Crab is at 81 Grosvenor St, London W1K 3JY until January 2015. Opening hours are midday until 10pm Monday to Saturday. They're currently on soft launch with 50% off food until Tuesday 29th September 2015. Keep up with their news on Twitter @houseofcrab