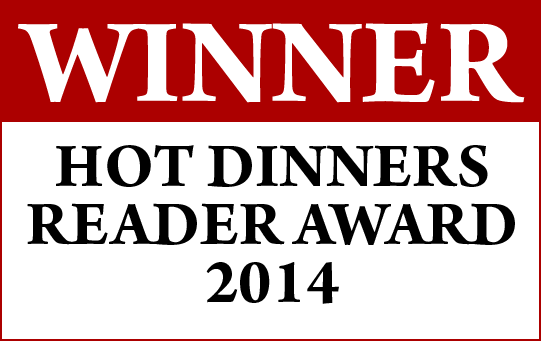 We've tallied up the votes, over 1000 of them, and are ready to reveal your favourite restaurant (or café in this case) of 2014 - and it's something of a surprise, we have to admit.

Over 230 new and notable restaurants opened in London in 2014, the biggest year yet since we started our new openings list and so it's the widest field that we've had so far.

As for 2014 - The Hot Dinners Readers Favourite Restaurant of 2014 is <drumroll> The Cereal Killer Cafe.

Yes, you might just have heard of that place. It came in for a lot of criticism when it opened - most of which seemed wholly unfounded. But as for why you lot chose it as your favourite - here are just some of the comments we got when people voted for them:

So congrats to the Cereal Killer Café.

We also have to give a quick shout out to number two. We initially thought they were ineligible by opening in 2013 - but they also had a new permanent restaurant in June 2014. Mussel Men in Dalston clearly have a big following behind them - they got loads of votes, just behind Cereal Killer - so it sounds like it's well worth checking them out.

2. Mussel Men. "Amazing food in an informal setting and your dinner comes with a thumb war! Good laugh"

3. Tredwell's "I loved the food sharing and laid back atmosphere and the food and service is second to none."

4. The Palomar "It is a wonderfully confident new opening. Great cooking and the chefs all seem genuinely happy there. Great atmosphere and wonderful cocktails."

6. Luppulo "It's lovely, it's got character and friendly service."

7. Copita Del Mercado "Atmosphere, situation, menu and great choice of Spanish dishes as if you were back in Spain. Best tapas in London"

8. Barrafina Adelaide Street "I loved the old Barrafina but love the new one even more. It's a better room and they are lucky enough to have stolen Jose too. The food is new too so I can now go to Frith Street if I am craving the tuna tartare or head to the new one if I want the scallop ceviche."

9= Fera at Claridge's "Simon has brought the best of Cartmel to London and cleverly adapted for the City folk without sacrificing his creativity and passion for natural flavours. Expect two stars next year, and L'Enclume MUST get three!!"

9= Den. "Because it is full of my favorite food, especially salmon"

If you want to see everything that opened in 2014, take a look through our exhaustive list. And if your favourite new restaurant didn't make the list and you didn't vote - well there's only one way to fix that next year. Vote!