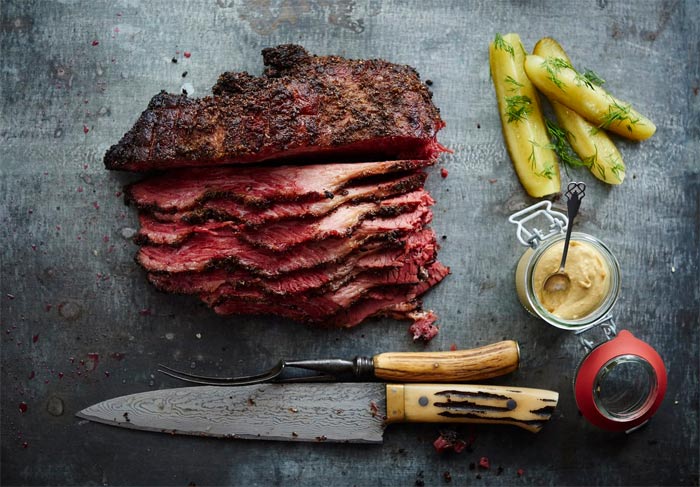 It's officially a trend: Jewish style deli food is having a moment in the sun - and the latest new opening to hit London is Cure and Cut, specialising in home-smoked pastrami, fresh salads and generously stuffed sandwiches.

The Covent Garden restaurant will be open between 8am to 9pm, offering breakfast, lunch and dinner - and the chefs will be curing, spicing and smoking their meats in house, all sourced from ethical suppliers.

We're eager to try the pepper cured pastrami with Tewkesbury mustard and pickles on honey-rye - and the brioche stuffed with poached native lobster, wild rocket and Marie Rose sauce. Salads will tick all the summer boxes: roast aubergine with tahini dressing, toasted sesame seeds, pomegranate, hibiscus flowers and basil sounds exactly what we want right now, and we're definitely not missing out on the charred cauliflower, roasted beetroot and pistachios either.

Get there early for the intriguing breakfast smoked bacon and cinnamon roll, or the fig and honey muffins - and the team will be brewing up weekly changing cordials and fresh juices. There's an alcohol licence too, for later in the day - with craft beer and organic wine.

Cure and Cut will have room for 30 customers to eat in, with counter seats on the ground floor and some tables in the downstairs dining room - or you can get your food to go, and even organise a delivery straight to your desk. Pastrami for days.