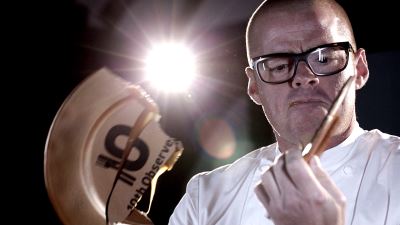 It was foodie central at the Freemasons Hall in central London tonight as the great and good of the food world gathered to celebrate the 10th anniversary of the Observer Food Monthly Awards.

As you might imagine, the party food was a step up from the usual fare with canapes being supplied by Angela Hartnett who created 10 canapés to represent each chef nominated for Chef of the Decade’s signature dish including Heston’s world-famous snail porridge, David Chang's steamed pork buns and René Redzepi's carrot salad in edible soil.

Heston Blumenthal, who was honoured as Chef of the Decade, brought his own creative take to the awards, making edible trophies for the ceremony. Made from dark and white chocolate with a passionfruit caramel filling they looked just like the coveted copper plates OFM have handed out in previous years."I remember the day I got the OFM restaurant of the year," he said. "It was 2003 and I was on my way to Madrid to do a demo introducing the world to the concept of multi-sensory cooking for the first time. It was also the week I came so close to going bankrupt - and the week that I got the third Michelin star. It really was the week that changed my life!"

Other popular London winners on the night, which was co-hosted by Jay Rayner and the Great British Bake Off's Sue Perkins, included L'enclume which picked up Best Rrestaurant (over £20 per head), Tonkotsu Best cheap eats (under £15 per head) and Hawksmoor which was voted Best place to drink by the newpaper's readers. Best newcomer in food and drink, supported by Selfridges - which was selected by the judging panel was Honey & Co.

As selected by the judging panel:

Chef of the Decade
Heston Blumenthal

Young Chef of the Year (under 30)
Georgie Dent

For more on the awards pick up a copy of OFM on Sunday 20 October 2013, free with The Observer.