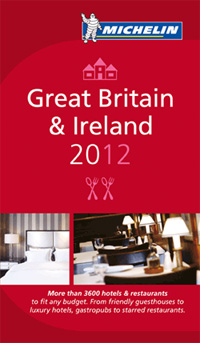 There were no new three stars in the 2012 Michelin Guide UK & Ireland, but London did pretty well with four new one-star restaurants which are Dinner by Heston, Pollen St Social, Hakkasan Mayfair and North Road in Clerkenwell. That's particularly impressive for Pollen Street Social which only opened in April.

"I am so ecstatic on hearing the news that Pollen Street Social has won a Michelin star," said Atherton. "It is the Holy Grail of the restaurant world so it really is testament to all of our hard work since opening in April. I'm incredibly proud of the team."

'I was blown away - it's very emotional,' North Road's chef Christoffer Hruskova told Hot Dinners. "I was hoping for it,' he admitted. So why did he think his was one of handful of restaurants in London that Michelin recognised this year? "We've got some new cuisine to the scene in London and no-one else does and maybe that's one of the reasons. It's a big compliment."

Thirteen is usually an unlucky number, but today it represented the number of new London winners of a Michelin Bib Gourmand, an award given to those establishments offering good cooking but at moderate prices.

"I am over the moon about picking up this Bib Gourmand - especially as we have only been open for a few months, " said Jose Pizarro on the Bib for Jose. "It's great news for good Spanish food everywhere." Pizarro's feelings were echoed by fellow restaurateur Russell Norman; "I'm delighted that the Michelin Guide has recognised da Polpo for its commitment to simple tasty food and great value."

There were losers, of course. Pied a Terre lost its second star on the departure of chef Shane Osborn who's gone off travelling round the world. And Richmond's Bingham restaurant also lost its only star.

Just outside London, the Hand & Flowers in Marlow, Buckinghamshire became the first British pub to be awarded two stars. The other UK restaurant to rise to two-star status was Restaurant Sat Bains in Nottingham.

For more on the list, including information on the new Michelin star winners, read our feature on London's Michelin starred restaurants for 2012.