[SIGPLUS_EXCEPTION_SOURCE] Image source is expected to be a full URL or a path relative to the image base folder specified in the back-end but /blog/2013/NYC/day3/gallery is neither a URL nor a relative path to an existing file or folder.
0
Shares

Our third day in New York featured three-star Michelin mastery and ended with some serious culinary fireworks in Tribeca. 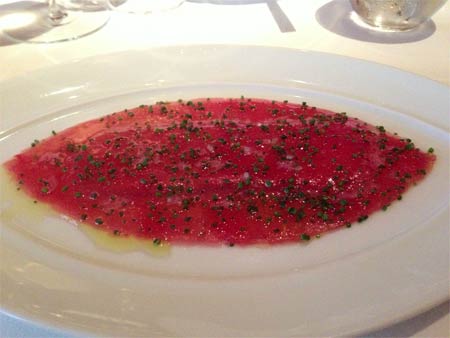 What we ate: Every trip needs a blowout meal and our one has definitely been lunch at Le Bernardin. If you don't know much about this restaurant, here's a few things of note; Le Bernardin is the only place in town to have received (and retained) a four star rating from the New York Times. This seafood restaurant has three Michelin stars, is number 19 on the World's 50 Best list and has more James Beard awards than you can mention. It's a huge culinary presence in the city and we were here to put it through its pace.

The dining room may be a temple to gastronomy, but this is New York, so rather than a hushed reverence this place has a fabulous buzz to it. It was given a major makeover in 2011. Lunch, we're told, is a great way to see the restaurant at full tilt. There's a nice mixture of group sizes, families in from out of town, ladies who lunch, business meetings - it's all happening. Most tables of two look into the dining room - as ours does - so we can watch the perfectly orchestrated service at work.

Chef Eric Ripert, who's been here since 1991 pops out to tell us he wants us to try the tasting menu. Well if he insists... We kick things off with some salmon rillettes and melba toast, but the first course simply blows us away. Layers of thinly pounded yellowfin tuna cover a wafer-thin layer of toasted baguette and foie-gras (see picture above). The whole thing is covered with chives and extra virgin olive oil and is, quite simply, one of the nicest things we have eaten. Ever.

It's hard to see how this dish can be bested, but there are several more on the eight course menu that come very close. Notable among them are the Warm Alaskan King Crab “Crabouillabaisse” and the final dish, that seems to be a play on tasting menus in that it would normally be the red meat dish, but is instead a very dense wild striped bass with Bhutanese red rice and green papaya salad served with a ginger red wine sauce.

On the wine front we stick to Austrian throughout, the sommelier pairing our lunch with Kreutles- Knoll Grüner Veltliner Federspiel, 2010, Wacha, Austria.

Service is impeccable and friendly - this place should be, if it isn't already, a place of pilgrimage to anyone hunting after Michelin success. It shows you can stay at the top of your game whilst remaining innovative, creative and keep the dining experience comfortable and fun. Only a handful of places we've been to manage to attain this balance. Le Bernardin should be on all your lists for a New York trip. If the tasting menu sounds a bit spendy - try the set lunch which is good value at $72 for three courses or try the separate lounge bar instead where you could have lobster and truffle on a brioche roll for $19. Just make sure you go, and tell Eric we sent you.

Where: Upper East Side

You can't stay at the Carlyle and not come here for drinks. This legendary bar has been drawing in the cream of society and politics for more than 50 years and features original wall art by Ludwig Bemelmans, the illustrator behind the Madeline children's books. Drinks are a little on the pricey side - $21 - so our recommendation would be the Martini - which comes with an additional flask of martini on the side in an ice bucket meaning you pretty much get two drinks for the price of one. Excellent. 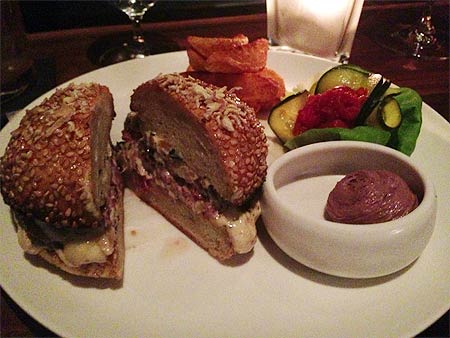 Dinner - The Lounge at Atera

What we ate: After our three hour lunch at Le Bernardin we'd be forgiven for not eating for days, but this is New York and we have just five days to make the most of it. So we head down to Tribeca late in the evening to the downstairs lounge at newish gastro hotspot Atera.

Upstairs is a 13-seat dining room in the style of Brooklyn Fare or London's Kitchen Table where chef Matthew Lightner (an accolyte of Rene Redzepi of Noma and Adoni Aduriz of Mugaritz) has been serving up extraordinary dishes since spring last year. The lounge bar downstairs opened up just before Christmas with a further 12 seats. Here you can try several of the dishes from the restaurant as well as some particular to this subterranean cocktail bar.

From the bar menu we go for the four dishes for $15 offer - each dish is pretty weeny, if you like the sound of it order two as you won't be able to share. We had lobster rolls in meringue buns, an amazing 'devilled egg', marrow which for the world looks like bone marrow but is actually a palm heart and pastrami duck hearts. They're all amazing, but the best is to come.

We spotted the table next to us having a burger delivered which turns out to be an off-menu burger that only hit the menu yesterday. The patty is made from a mixture of ground chuck, ground tenderloin and marrow, fried in lamb fat with pork jowl bacon topping and two types of American cheese. It comes with chips and a 'dipping sauce' of chicken liver pate. It's bloody amazing. Everything here was incredibly inventive - including the cocktails. It's in a pretty rough-ish looking part of town, so you may want to cab it here - but Atera is definitely worth a visit. It's been a pretty good day all in all.

Find out more with our full guide to where we ate, drank and stayed on our 2013 trip to New York.