[SIGPLUS_EXCEPTION_SOURCE] Image source is expected to be a full URL or a path relative to the image base folder specified in the back-end but /blog/2011/hawksmoor/gallery is neither a URL nor a relative path to an existing file or folder.
0
Shares 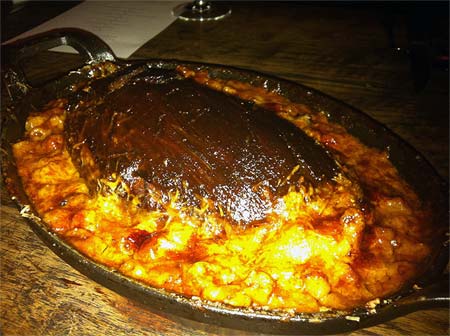 Opening on October 31 2011, the new Hawksmoor Guildhall in the City has a few surprises up its sleeve.

First up is the breakfast menu which will be available all week long, a first for Hawksmoor which has so far only offered brunch at the Shoreditch restaurant. Co-owner Huw had apparently been at a tasting for this breakfast menu earlier the day we met him; expect a strong beef focus to kickstart your mornings.

And then there"s the beef tasting menu. This will only be available to diners in groups of 8-10 at Guildhall and Hawksmoor are investigating the possibility of serving it on an Lazy Susan.  The full tasting menu is:

Hot Dinners was invited along to try out the menu before it launches and it certainly is an (entirely welcome) onslaught of beef.

Particularly outstanding dishes were the oysters with kimchi and short rib - the kimchi adding a welcome kick to the oyster - and the beef vs veal steak tartare - the veal won that one hands down but both some of the best tartare we've had.

But it was the beef shin macaroni which instantly jumped to the top of the list of the best things Hot Dinners has eaten this year.  The huge shin is cooked for hours while the macaroni is cooked in the juices of the shin.  A truly outstanding dish that we could have spooned away at for days.  The recipe for this will be in the new Hawksmoor at Home book, which makes that a must-purchase.

The Beef Tasting Menu should be available upon Hawksmoor Guildhall's opening in October and the price of this meal of meaty delights will be £700 for a table of 10.

Hawksmoor Guildhall opens on October 31 2011 (soft-launch plans are still being decided). The Hawksmoor at Home book is published on 13 October.