Written by Catherine Hanly
Created: 11 May 2016 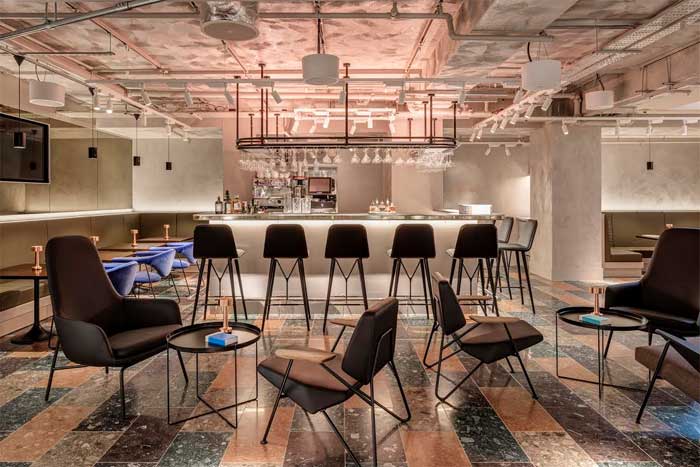 Could this be the most beautifully-designed restaurant to hit London this year? Harvey Nichols has just announced the opening of The Wallpaper* Bar + Kitchen residency in its Knightsbridge store.

It's part of Project 109 - a new concept space in their Menswear Department which will have a dedicated entrance on Sloane Street, along with a new entrance on the corner of Knightsbridge and Seville Street.

The design magazine has been involved in everything from the menu design to the staff uniforms and here's what we know about it so far:

It's an all day kind of place - open from breakfast through to dinner.

At night everything changes - it'll be more of a cocktail bar serving up light dishes like chargrilled lamb with crushed peas on freshly made tortilla chips.

The cocktail list has an international flavour - being inspired by drinks from some of the World’s 50 Best Bars. So there's a Grocery & Grog Old Fashioned from the Dead Rabbit in New York, a Scented Negroni from Dry Martini in Barcelona and a Paper Anniversary by Rémy Savage at Little Red Door in Paris.

Be prepared for breakfast to be a boom time here - the menu features all manner of eggs using sourdough bread from Hoxton's Fabrique Bakery as well as bacon sarnies, homemade granola pots and protein shakes.

Lunchtime is sarnie time - think cured pastrami with gherkins; sirloin and Asian slaw; and chicken with avocado and bacon

The Wallpaper* Bar + Kitchen opens today on LG 1 in Project 109 of the Menswear Department at Harvey Nichols, 109-125 Knightsbridge, London SW1X 7RJ. Opening hours are 8am-11pm on Mondays to Saturdays, and for lunch on Sundays. Keep up with their news on Twitter @HarveyNichols