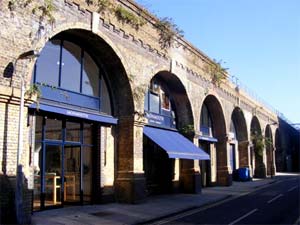 Undaunted by critical reaction to his new restaurant in Bermondsey, Gregg Wallace is taking to the streets. Hot Dinners hears that Wallace's decision to open a restaurant so close to London's cooler-than-the-cool-crowd Maltby St Market was just the first salvo in his campaign to take over the burgeoning street scene.

It's no secret that many of the market's stalls have moved over the past week or so towards Spa Terminus, but nobody quite understood why. But Hot Dinners has seen minutes from the most recent Southwark planning committee meeting which outline Wallace's plans for the area.

Where the current Monmouth Street Coffee House is will be a 'living museum' where tourists can learn to speak cockney, try local specialties like cockles, eel and liquor - and there will be a new brewery serving Gregg's Grog where Kernel used to be.

"I love the SE1 area, it's where I grew up," said Wallace, who declined to elaborate on his plans for Maltby Street.

That said there are some residents who aren't planning to leave without a fight. St John's whose custard doughnuts have lured so many south of the river say that they'll never leave the arches and have elaborate plans to make the area unfit for development. "We've got a sea-salted chocolate balls song we think will go viral," said Fergus Henderson. "We're not sure any development company will be interested in Maltby once that happens."