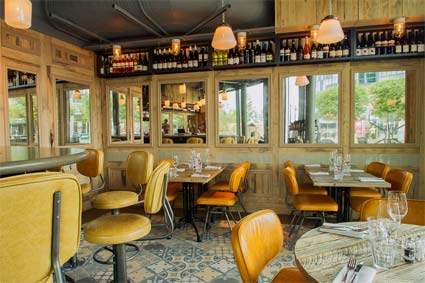 Looking for somewhere other than the huge chain restaurant to eat at when you go to the O2? We may have the answer.

Greenwich Kitchen is a new all-day restaurant coming to North Greenwich's Peninsula Square with a strong focus on wine. Its general manager is Alice Bernigaud whose background includes both 28:50 and Bistro Du Vin while their master sommelier Gearoid Devaney has earned his wine stripes at Tom Aikens and Pierre Gagnaire in Paris. Apparently we can look for "some well priced older vintages, from his personal reserves."

As for the food, it's based on Devaney's favourite dishes, worked on with a chef who has previously been at Soho House in the kitchen. The food will be matching "sustainably sourced ingredients with a dynamic yet approachable wine-list". There's a hot and cold selection, as well as open sandwiches on that menu and some examples include:

Plus there's breakfast with the usual suspects and charcuterie too.

As for the wine list, prices range from £20 (with a healthy amount under £30) up to £350. You can see both the menu and the wine list on their website.