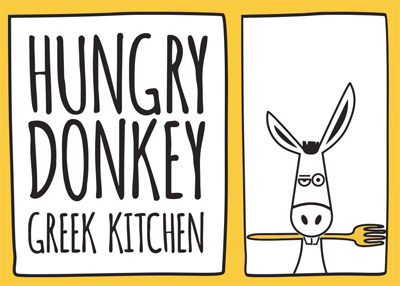 It's almost becoming a trend - another Greek restaurant is getting ready to open in London. This time, Hungry Donkey has a focus on Hellenic street food and being environmentally conscious is on the way to the City.

Hungry Donkey is by Markos Tsimikalis who says "I really wanted to create somewhere that is modern and cool without losing the simplicity of classic Greek dishes." The all-day restaurant kicks things off at breakfast with Greek yoghurt pots with honey, walnuts and seasonal fruits, filled pastry pies including Tyropita (with feta and cottage cheese) Spanakopita (with spinach, feta and dill) and Bougatsa (with semolina custard crème, cinnamon and icing sugar). Plus Greek coffees and teas alongside.

Lunch and dinner includes freshly prepared pitas filled with a choice of free range spit roasted meat, tomato, tzatziki, onion and parsley. There will be souvlaki from the Robata grill of slow grilled pork, chicken or lamb, served with lemon, wild oregano and salt. And alongside that, expect Moussaka, stuffed courgettes with minced meat, pine nuts and parsley served with an avgolemono sauce. And finally for dessert, there will be diples (thin dough deep-fried and served with honey and walnuts), Galaktoboureko (orange flavored semolina custard in filo pastry and roasted quince with maple syrup and cinnamon). Being in a City location, they'll have take-out and will also be catering for yeast intolerant, lactose sensitive, vegan and vegetarians.

As for drinks, they'll have a list of entirely Greek wines from locations such as Santorini, Crete, Florina, and Amyndeon and and a mix of local and Greek beers including Volkan and Septem. While spirits include Mastiha, a Greek digestif liquor, Metaxa, a renowned Greek brandy and, of course, Ouzo.