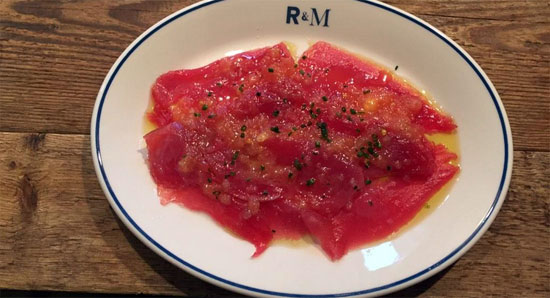 The people behind Goodman (some of London's best steak restaurants) seem to like shaking up the London restaurant scene every now and again. They've certainly done that with Burger and Lobster and are now turning their attention to London's seafood scene with the launch of their next restaurant, Rex and Mariano. Hot Dinners spoke with them to find out what to expect.

This is a collaboration between fishmonger Rex Goldsmith and Goodman. Rex and Mariano will be a seafood restaurant which aims to make high-end seafood more accessible - trying to offer Londoners the same experience they get eating seafood on the coast. But in the middle of Soho. It's following a similar route to Burger and Lobster - in that by buying more and linking directly with the suppliers, they'll be able to pass that cost saving onto customers. In addition, they've been looking at new suppliers as a way of getting lesser-seen seafood onto London plates.

The restaurant itself will seat 115 and will be dominated by the central bar/kitchen. You'll be able to wander around that and take a look at what's on offer or being grilled up and then order from your table. You'll do that through a tablet ordering system. That's something that might make a few people wary, but we've been assured that the combination of browsing the central bar for the food and ordering will be as seamless as possible. You won't be paying with the tablet - but they are changing things there too by dropping the automatic added service charge when you pay to just 5% (instead of the standard 12.5%).

As for the menu itself, it'll be split into grills, oysters, raw fish, salads and sides. There will be fresh bread baked in that central section. From the plancha grill will come dishes like whole lemon sole while oysters will start at just £1.50 each. They're hoping to bring in Norwegian Arctic char, which they're describing as a less fatty salmon and are will use it for ceviches and tartare (although expect Scottish salmon on the menu too). You can also expect fried Sicilian spatola, mussels and fried zucchini on the side.

We're looking forward to trying their Sicilian red prawns which Goodman's Dave Strauss refers to as a "life changing" dish that many in London won't have had the opportunity to try.

Drinks also see more innovation. Rex and Mariano will link up with Roberson wine to sell wine on draft from just £4 a glass (for 125ml). They'll have eight wines available alongside a small cocktail list.

Rex and Mariano opens 28 November 2014 at St. Annes Court, London, W1F. They won't be taking bookings for December - so walk-ins only - but are looking to introduce reservations in January. There's a soft launch on 28 December with 50% off the total bill from 5pm.