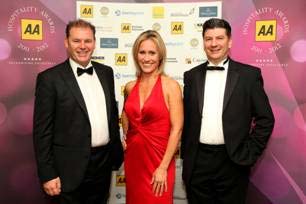 Chefs, restaurateurs and hoteliers were out in force at London's Park Lane Hilton last night for the AA Hospitality Awards where London and the South East did pretty well thank you very much.

Probably the most important announcement of the night was that Surrey restaurant The Latymer at Pennyhill Park in Bagshot would be joining the ranks of just seven other restaurants in the country given the full five AA rosettes, which categorises them as somewhere where the 'cooking compares with the best in the world'.

The other current holders are Marcus Wareing at the Berkeley, Sketch and Tom Aitkens, as well as Restaurant Sat Bains, the Fat Duck, L'enclume and Le Manoir aux Quat'Saisons.