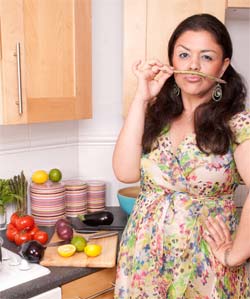 Yesterday's announcement about Thomas Keller's Harrod's installation was long-rumoured, but what came as a big shock was the price.  At £250 a head, the pop-up suddenly went way over the budget of most Londoners. It's also a lot more than the price of a meal at Keller's French Laundry restaurant in California which at today's exchange rates comes in at a slightly more palatable £165.

In an effort to create as big a culinary buzz but at less of a bank-manager-worrying cost, London food writer Sabrina Ghayour has created her own pop-up - the French Launderette.

For the sum of only £2.50, guests will be welcomed into London restaurant The Chancery for a four course menu inspired by some of Thomas Keller's most famous dishes. "The idea is that I will charge diners 1 percent of the cost of Thomas Keller’s pop-up," explains Sabrina, "and deliver a carefully-created four course menu with a very humble price tag of just £2.50 per person, allowing anyone and everyone to be a part of the evening."

Ingredients will be donated from a host of foodie and twitter friends and guests will be encouraged to donate anything above the £2.50 limit to the charity Action Against Hunger.

40 seats will be available for the event on 2 October and the booking lines will open on the same day as Keller's pop-up on the 1 September.