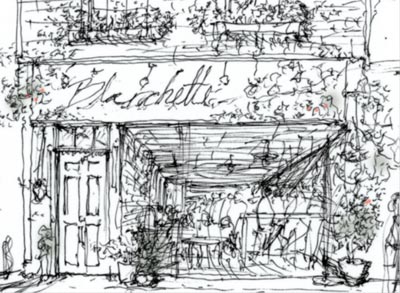 Not content with busying themselves with the upcoming opening of their latest restaurant Ember Yard, Ben Tish and Simon Mullins from the Salt Yard Group are also consulting on a new Soho bistro, due to open around the same time.

Their head chef is Tam Storrar, former senior sous chef at Bibendum. He's still finalising the menu, but dishes include:

Drinks wise, they'll obviously be offering French wine, with organic cider on the menu too.

As for the look of the place, they're aiming for the style of a Parisian bistro, with the restaurant seating 50 - 60, including a private dining room and counter dining for up to ten. The tables and chairs will be a mix and match of antiques style, coming from Helene Allen of Little Paris. Meanwhile, Malik is the founder of sound design company La Music du Faubourg so naturally, he'll be in charge of the music selection, while Maxime and Yannis bring years of hospitality experience with them, with Yannis most recently General Manager at Dehesa.

Blanchette opens at the end of November/early December at 9 D'Arblay Street Soho, W1F 8DR. For more information, follow them on Twitter.