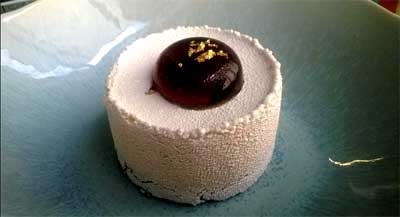 Opening on Catherine Street in Covent Garden next week is Italian restaurant Four To Eight. And they've got an interesting team on board. Executive chef is Andrew Lasseter who worked at Circus and Cocoon while the Head Chef is Ian Loynes who was formerly sous-chef at the Square. He's joined by Head Sommelier Ksenia Karpenko who was previous at Hotel Baltschug Kempinski in Moscow.

It's the culmination of a dream from brothers Gino and Leo who owned the Italian sandwich shop that used to be on the same site.

The 100 seater restaurant will serve up a daily menu on two floors, split into small plates, pasta dishes, sandwiches and steaks from The Rare Breed Meat Company in Colchester. Desserts will be made in-house by French pastry chef Anabelle Delrieux who was previously chef patissier at Anna Chocolat in Bordeaux. She'll be serving up her own take on tiramisu (see photo).

The restaurant will be running a soft launch from Friday 26th September until Saturday 4th October, offering 50% off the food. To book please e-mail reservations@fourtoeight.com