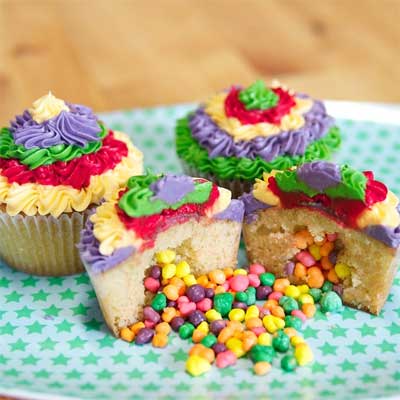 It's all go at Kingly Court with the news that two new places are opening their doors before the end of the year. One of those is Crumbs & Doilies by baker Jemma Wilson.

Wilson worked at the Dover Street Market outpost of artisan Parisian cafe Rose Bakery before going on to set up Crumbs & Doilies as a market stall. She has a massive 200k subscribers to her Cupcake Jemma channel on the Jamie Oliver Food Tube Network which should mean plenty of custom for this new West End bakery.

The Crumbs & Doilies shop will - in addition to serving up sweet treats - offer espresso and filter coffee using locally-roasted beans, as well as considerately-sourced sodas and hot chocolates. The cakes don't have many food miles to their name as there's a fully-equipped bakery upstairs where each day’s cakes and cupcakes will be made.

There are going to be 60 flavours on rotation including:

Lemon Mess - a lemon-meringue pie but in a cupcake form. Lemon sponge, filled with home-made lemon curd, topped with lemon and crushed meringue buttercream and drizzled with more lemon curd

The two floor store will be on the ground floor of Kingly Court walkway just off Beak Street with a few stools available by a window bar and an outdoor bench.

"Being the only exclusively sweet offering in Kingly Court is going to be an exciting challenge. We will be bringing our unique and unusual variety of cupcakes, cakes and bakes to the table as well as artisan coffee and an awesome range of sodas using local suppliers and roasters. The menu will change every day meaning our customers won't ever get bored!"

Crumbs & Doilies opens on 16 December at Kingly Court, Kingly Street, London W1B 5PW and will be giving away 50 free cupcakes every day from 16th - 19th Dec, first come first served. Keep up with their news on Twitter @crumbsanddoilies