Food Pit - talking to the guys behind Twitter's pop-up parody 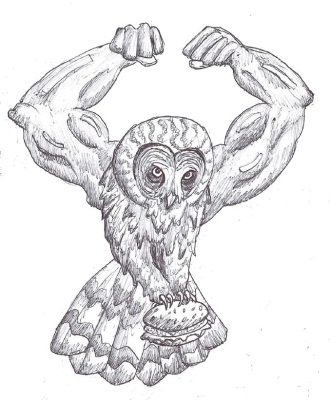 Have you heard of Burgatory in Greenwich? This new pop-up invites punters to wait in a featureless room for five hours, before entering a guilded hall heaped with free cheeseburgers. Or what about Perodique in Bethnal Green, which provides an 118-course tasting menu offering diners one atom of every element in existence (not very filling.)

If so, you’re probably a follower of @foodpit - who reckon pop-up culture and the foodie ‘scene’ has crawled just a little bit too far up its own bum. This tongue-in-cheek Twitter account, run by friends Guy and Frog, jeers at imaginary restaurant culture, parodies pretentious menus and creates a “weird fantasy version of London where things have gotten totally out of hand.

Read on to find out what they think the next big food trend should be, if they actually like any restaurants in London, and why Jostledog, the 8am Central Line hotdog pop-up, should become a reality. (And no, we don't have a clue what the image is supposed to be - it's the only thing they would give us.)

Hot Dinners: @Foodpit got really popular, almost overnight. When did you start it, and what happened to make it take off?

Guy: I started the account in April and roped Frog in a few weeks later.

Frog: I was brought on as a consultant *puts on shades*

Guy: He begged. We trundled on for a while - getting unreasonably giddy over hitting 300 or 400 followers - but then one evening it all went nuts. Frog: Some big proper human must have retweeted us, and our number of mans doubled overnight.

Guy: And then the UK editor of Buzzfeed spotted us in June, and we became sort of a thing.

Frog: *puts on another pair of shades*

And what prompted you to make a parody account making fun of London’s restaurant culture in the first place?

Guy: I initially started it in a cold-eyed attempt to win a competition, as awful as that sounds.

Frog: Guy, you’re everything that’s wrong with social media. But then again, I’m just as bad.

Guy: Once Frog got involved, we realised we were both entirely motivated by the approval of people we don’t even know and so went at it. The competition is sort of forgotten now – we’re just desperately seeking validation from internet strangers.

Frog: It’s true. But then again, if it turns out we had won, and there’s money, we’d be spending it all on gristle and wallop at the kind of steak place that has mahogany panels and boxes of matches with the logo on.

Guy: Additionally, if any PRs are reading this, we’re definitely not above coming to your events for a free meal.

Frog: Though we won’t review it, of course.

Guy: God no. I’m just in this for a free drink.

You’ve come up with a lot of ‘interesting’ ideas for pop-ups, but if you could make one a reality, which would you go for?

Frog: Definitely Jostledog, the hot dog pop-up we imagined running on a Central Line train at 8-9am weekday mornings. The idea of a bunch of earnest hipsters trying to chomp down on mustard-drenched hotdogs in the middle of a cattle-packed train is lovely. It makes me smile in the same way as the thought of Alan Sugar being chased down a trench full of golden syrup by malevolent chimps.

Guy: If I had my way it would be DWRF - a cocktail bar run by axe-wielding dwarves from your average shonky fantasy novel. Just imagine: low ceilings, phenomenal booze and a load of tiny, bearded blokes singing about gold and fighting. Bliss.

What kind of reactions have you had from the London food scene? Has anyone taken it personally?

Guy: The account is followed by a surprising number of pubs, restaurants and food bloggers, and I think they take it in the spirit that it’s meant – a weird, fantasy version of London where things have got totally out of hand. We’ve had a few articles written about Foodpit and they’ve all been positive, though many have called it ‘a scathing attack’ and similar. I don’t think we ever really wanted to be scathing (with the exception of a couple of really appalling places - Redemption, we’re looking at you); we’re just having a bit of fun.

What’s your favourite place to eat in London?

Guy: A toss-up between the Hawksmoor and Pitt Cue for me. Don’t make me choose. I couldn’t cope. Probably Pitt Cue. Oh god this is like Sophie’s Choice.

Frog: Sushi Tetsu on Jerusalem Passage is indescribable and run by a god, and Four Seasons Chinese restaurant in Bayswater does duck that people come from Beijing to eat. There’s also a bloke who sells raw clams in Borough Market who I go to almost every day, pretending I am a bear.

What should London’s next big food trend be?

Frog: Eggshells full of petrol, served in a switched-on microwave. It would be so tense and exciting. Or we'll adapt the pick-your-own concept for the meat world - maybe a zoo where a world-weary South African guy agrees to BBQ anything you successfully fight.

Guy: A sterile room with a liability waiver and all the Bourbon you can drink.

Frog: But seriously? Really cheap, nice stew. A pretty van selling big bowls of tasty, nourishing stew and not charging £7 because they’ve given it a silly name and good graphic design. Really, you could do it: loads of root veg and a bit of beef, and you could sell it for a couple of quid and still make decent money. I sound like I have really cared about this idea for a long time, but I just thought of it.

Guy: Call it 25p for a Yorkshire pudding and I’m in.

So you can’t think all pop-ups are really awful…

Guy: Not at all! I once did a comedy gig on the roof of a block of flats with a pop-up bar and hotdog stand, and it was brilliant. But there is a tendency for pop-up culture to crawl a little too far in its own bum. I suppose that’s the case with any exciting scene where people are passionate about what they do

Frog: I love the food but the whole culture around it all is desperately embarrassing. Honestly, I wish food in London was more about getting on with enjoying eating things, rather than being seen as the type of person who enjoys eating things.

Guy: Agreed. It seems that in London there’s a fine line between being an excellent bar with knowledgeable staff and a place that’s harder to get into than East Berlin and packed with surly monsters who resent your very presence.