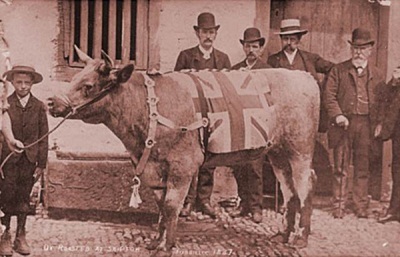 Honestly, we don't know why anyone would bother leaving London on Easter weekend when there's such fun to be had. Like the Ox Roast planned by Flat Iron at the Ship Wandsworth.

As they succintly put it "We're going to roast a cow, on a giant spit, in front of 6 tonnes of burning oak, In a pub. And you're invited."

In slightly more detail, the Flat Iron folk will be roasting a 250kg Longhorn steer on a custom built a spit. The process will take a day during which it'll be continually basted with Young's London Stout and then carved up into a 500 portion feast.

If you happen to be down at the Ship on Thursday night or Friday you'll see the cooking in action, but the eating takes place on Easter Saturday 19th April. £12 will buy you roasted and carved longhorn beef alongside a jacket potato, salad and gravy, plus a pint of newly launched Young’s London Stout. Tickets are now on sale where you can book a time slot between noon and 8pm.

The Ox Roast takes place at The Ship Wandsworth on Saturday 19 April 2014. To book your place click here http://tinyurl.com/oxroast