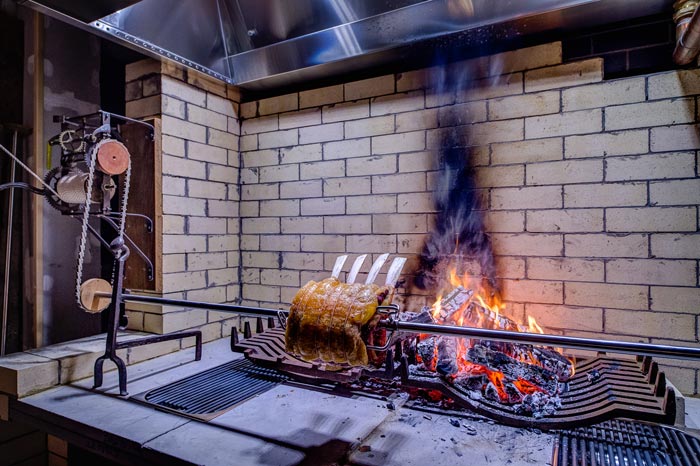 Since originally popping up as a Shoreditch residency, Flat Iron have gone on to become very big indeed. Best known for their affordable steaks, they've been a big hit all over town. And now they're about to return to Shoreditch, but not without bringing something new back with them.

The big thing is a HUGE custom built spit roaster. You might remember that they once roasted a whole cow at The Ship and it was that roast which sparked Flat Iron's Charlie Carrol's interest. He spoke to historian Ivan Day to find out more about the history of spit roasting in the UK - discovering that 100 years ago this kind of cooking was a big thing in the UK. So they're bringing it to Shoreditch. They'll be roasting meat on wood embers in front of the radiant heat of the fire - so expect some amazing slow cooking here. We also like the idea that the huge contraption (3 meters wide) is hand cranked using a 200-year-old clockwork mechanism.

While they won't be tackling something quite as big as a whole ox at the new place, the cuts will still be pretty big - the hearth will be two metres wide. To start with, they're testing cuts like a whole forerib of beef - as well as a rump, loin and rib cut. So you won't be going hungry. Alongside these larger cuts, they're also be using the Denver cut of beef from inside the chuck roll (with lots more marbling). And you can expect to see multiple pichanas roasting on skewers too.

As with the other Flat Irons, all the fittings and furniture are custom made - and that brings with it another twist. If you like anything in the restaurant and you can pick it up - you can buy it. They see the place as a working gallery. That means the furniture, light fittings, tableware - all of it can be bought. We're not quite sure how that's going to work in practice - but it does sound VERY intriguing.

Plus it will be a place for the working community of Shoreditch during the day. They'll be using a Brighton roastery to produce filter coffee (or Yorkshire Tea if you fancy) for only £1 as they want to encourage people to use it as a workspace. With that in mind, they'll have super-fast fibre internet and lots of power points. Cake is promised too.

On top of all that - you'll also be able to get the regular affordable steak favourites and specials that Flat Iron is known for. And a new dessert (which is under wraps at the mo).

Flat Iron is opening at 77 Curtain Road, London EC2A 3BS on 20 June 2016. They'll have free steak on the launch day from 6pm, you'll just have to buy drinks and sides. They don't take reservations. For more, follow them on Twitter @flatironsteak 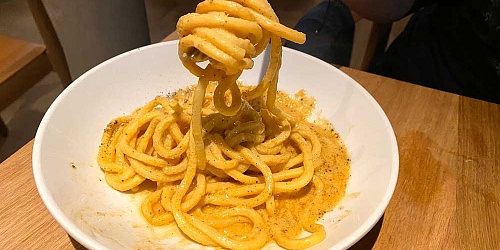